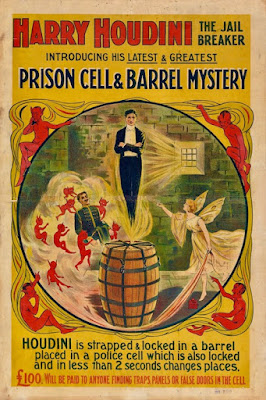 The "Prison Cell & Barrel Mystery" has to be the least discussed original Houdini effect. In most biographies it receives only a few lines, if it's mentioned at all. In fact, if it weren't for the often reproduced UK poster (right), I think this effect might have become lost to Houdini history. Why is that? Is it because Houdini didn't do it for long? Or is it because the Prison Cell & Barrel Mystery was a rare case of a Houdini misfire. Let's explore.

The origin of the Prison Cell & Barrel Mystery goes back to Houdini's earliest days as a performer. Harry's first partner in The Brothers Houdini, Jacob Hyman, left the act and was replaced by Houdini's real brother, Theo. After a short stint in the army, Hyman got back into show business as J.H. Houdini. Having co-created the name, Jacob believed he had as much right to use it as Harry. His feature was an escape from a barrel that he called The Barrel Mystery.

When Harry began achieving great fame in Europe, Jacob continued to tour small time American Vaudeville as "Houdini". This caused confusion in the press and with the public (and can still trip up researchers today). By 1903, the idea of two Houdinis became intolerable to Harry. After waging a war of words in the press, Harry dispatched his brother Leopold and a lawyer to confront Jacob. Exactly what was worked out is not known, but from that day forward, Harry became the only Houdini and also acquired Jacob's featured barrel escape. It seems likely Houdini simply bought out his former partner, as Jacob would go to medical school and become a Beverly Hills physician. (He and Harry remained good friends.)

Now in possession of Jacob's barrel, Houdini developed a new effect to replace Metamorphosis. The effect would see him locked in the barrel and then "triple-locked" into a portable prison cell. In "less that 2 seconds", Houdini would make his escape and his assistant, Franz Kukol, would be discovered inside. It's interesting that it was not Bess who played this substitution role as she had for 10 years with Metamorphosis. But it appears Bess was ready to leave the act, at least as a regular participant. The Prison Cell & Barrel Mystery offered her that...escape.

The first performance of the Prison Cell & Barrel Mystery was at the Regent Theatre in Salford during the week of October 3, 1904. Houdini offered £100 to anyone who could find trap doors within the jail cell. (The barrel is apparently not part of the deal.) But a review of his act the following week at the Empire Palace of Varieties in Bristol describes the effect is being performed with a curtain cabinet instead of the jail cell, much in the style of Metamorphosis. Perhaps there was a problem with the cell that night. Or might this be the first sign that something wasn't quite working?


On paper, the Prison Cell & Barrel Mystery seems like a winner and an improvement over Metamorphosis in every way. First off, a barrel seems even more confining than a large steamer trunk. Instead of a curtain cabinet, meant only to conceal the exchange, a locked prison cell adds another layer of difficulty, while also nicely evoking Houdini's famous prison breaks. And the appearance of an assistant in the barrel provides the same surprise finale as Metamorphosis.

However, it's clear from the notices that the new feat did not pack the same punch as Metamorphosis. Newspapers frequently praised Metamorphosis as "clever" and a "neat trick." But descriptions of the Barrel Mystery tend to be somewhat dispassionate, such as this November 15, 1904 review of Houdini’s act in Leeds:

Houdini, in addition to his handcuff business, at which he is a past master, showed a packed house at the Tivoli last night a model of a prison cell. Enclosed and locked in a sort of barrel, he was duly placed in the cell, which was triply locked outside. In a minute or so, he was outside the cell and the barrel, when opened, contained an attendant.


So what was wrong? The Prison Cell & Barrel Mystery had it all. But maybe that was the problem. Was it an escape or a magic trick? It seemed designed to be both, but in doing so, it becomes neither. The set-up is pure escape, and a sacred one at that. This is "The Jail Breaker" after all. But the appearance of an assistant at the end reveals it to have been "just a trick" all along. One could see this as being confusing for the audience. It could have the unintended effect of undercutting the legitimacy of all of Houdini's escapes. Because if Houdini could secrete an assistant inside his escape apparatus whenever he liked, well...

It's also been suggested that the appearance of a male assistant lacks the poetry of man into a woman, husband into wife. Hardeen himself noted the improvement in Metamorphosis when Harry replaced him with Bess. Said Dash, "The exchange of one young man for another who looked a lot like him could not be as dynamic as the virtual transformation of a woman into a man."

This is probably why, despite the posters he had made touting the exchange, Houdini appears to have dropped the substitution element, at least on occasion. The Sunderland Echo on May 23 1905 describes the Prison Cell & Barrel Mystery as a straightforward escape, with Metamorphosis back in the act as the closer. But even as an escape, it doesn't seem to have always wowed the crowds. As Houdini explained the workings of his prison cell one night in Hastings, someone in the upper part of the house repeatedly shouted, "It is faked." 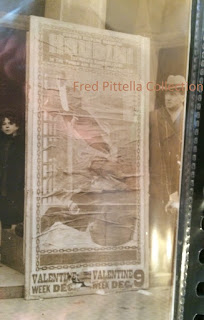 Nevertheless, Houdini took the Prison Cell & Barrel Mystery to America and featured it during his triumphant return tour of 1906. Despite having a fresh poster created that now billed it as "The Prison and Barrel Transposition" (right), he again appears to have presented it as a straight escape, as suggested in this April 19, 1906 review in the Hartford Courant:

In Salem, Mass, he was locked in a stout barrel with four locks and many straps, and placed in a facsimile of a German cell. In a few moments he was free.


But not all the reviews were dispassionate. When Houdini played the American Theater in New York in May 1906, the NY Clipper records:

His "prison cell and barrel substitution" was new to most of the audience, and was a tremendous success, being one of his best offerings.


Houdini was doing the Prison Cell & Barrel Mystery as late as December 1906 (when the above photo was taken), so it's likely it continued as a periodic feature right through his 1907 tour. But with the coming of his next original invention in 1908, the undeniably successful Milk Can escape, the Prison Cell & Barrel Mystery vanishes from the record. Metamorphosis returns as Houdini's preferred substitution illusion, and never again would Houdini so mix magic and escape into a single effect.

There is no known photo of Houdini performing the Prison Cell & Barrel Mystery, and none of the apparatus survives (as far as I know). One can see the barrel in photos of Jacob Hyman, and it's likely its secret is revealed in Walter Gibson's Houdini's Escapes (page 212). Unfortunately, there are no photos or even a sketch of the prison cell. That part of the effect remains a mystery.

Today Metamorphosis stands as Houdini's great substitution trick, and is still performed to acclaim. The legacy of the Prison Cell & Barrel Mystery remains a poster, and perhaps a rare example of when Houdini got it wrong.

Information critical to my understanding of the Prison Cell & Barrel Mystery appears in Derek Tait's terrific new book, The Great Houdini: His British Tours. Also thanks to Joe Posnanski and Bill Mullins for finding me reviews in America. The photo of Jack Hyman with the barrel is from The Secret Life of Houdini Laid Bare. The original belongs to Roger Dreyer. U.S. poster pic comes from HHCE.