Houdini vs. Captain Smith and the Success

Houdini's escape from the convict ship Success on June 4, 1913 is not one of his more widely known challenge escapes. This could be because no photos from the stunt have survived. Nevertheless, this is one of his great escapes, and it's a story worth telling in detail. And while no photos exist, film footage does! But I'll get to that. 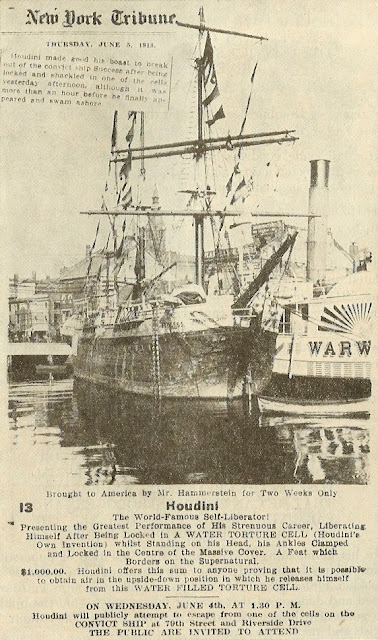 The Success was a former Australian convict ship commanded by Captain David H. Smith. In 1911, it came to the United States to tour as a floating museum and tourist attraction. For fifty cents, visitors could view shackles and torture devices on deck, and go below to see cells containing wax figures of prisoners in restraints. There was also the infamous "Black Hole" in the stern of the ship; two solitary confinement cells two-feet square in which a prisoner "could neither sit down nor stand upright." Captain Smith offered $100 to any woman who could remain confined in the Black Hole for a specified period of time. A student nurse from Somerville won the contest and gained local fame by remaining a remarkable 30 hours.

In the summer of 1913, the Success arrived in New York City and docked at 79th St. and Riverside Drive. It was opened daily 10 A.M. to 10 P.M., and proved to be a popular attraction.

Meanwhile, an ocean away, Houdini was boarding his own ship, the North German-Lloyd liner Kronprinz Wilhelm. He was headed home to New York where he was set to open at Hammerstein's Victoria on June 2. Here he would present the American debut of his latest invention, The Chinese Water Torture Cell.

Always keen for publicity, Captain Smith sent a cable to Hammerstein's proposing a challenge. The cable was relayed to Houdini at sea. This resulted in the following spirited exchange:


ON BOARD CONVICT SHIP "SUCCESS"
79th St. and Riverside Drive.
New York City, Wednesday, May 21, 1913.
Dear Sir:--Hearing you are bringing Houdini back from Europe for a special two weeks' engagement, I hereby challenge your star to escape from one of the cells on board the historical Convict Ship "Success."
If you will allow me to manacle him, lock him into one of the cells, I am ready to wager that he will not escape.

Radio Mid-Ocean
ON BOARD N.D.L. KRONPRINZ WILHELM
Friday, May 23, 1913
Accept challenge any time mutually agreed upon to undergo test. Want no favors, but demand fair play.

HOUDINI, N.D.L. KRONPRINZ WILHELM (Via Wireless)
New York City, Saturday, May 24, 1913
Will give you fair play. Come to Convict Ship "Success," 79th St. and Riverside Drive, Wednesday, June 4, one-thirty P.M., prepared to undergo test, which I feel certain will be the most difficulty one you have ever undertaken.


The merging of these two New York summer attractions was inspired, and the challenge was well advertised. On Wednesday, June 4, Houdini arrived at the appointed time, as had a large crowd to witness the contest. The wager between Captain Smith and Houdini was set at $1000. A much later account in the Lewiston Journal claimed Houdini first escaped from shackles and a straitjacket while hanging from the ship's yard arm, but I've found no evidence to support this. 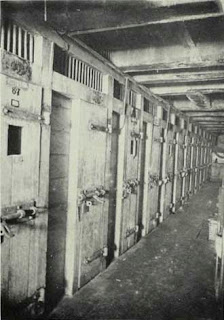 Captain Smith first brought Houdini to the Black Hole. But Houdini refused. "I wouldn't go in your Black Hole for $1000," he said. Instead, Houdini was locked in one of the "refractory" cells on the lower deck. Here the heavy cell doors were made of ancient teakwood and six inches thick. He was also manacled and secured to a ringbolt attached to the hull.

The New York Evening Telegram reported that it took Houdini one hour and forty-five minutes to escape, then:

In some mysterious way he gained his freedom through one of the portholes of the old ship, and the first news of his escape came from the hundreds aboard and ashore when, with a cry of triumph, Houdini, broken chains and fetters still clinging to legs and arms, dived into the waters of the Hudson and swam about until picked up by a boatman.

Captain D.H. Smith, who commands the Success, was as discomfited over the escape of Houdini as the latter was elated.


As I said, there are no photos from this day (that I'm aware), but there is film! Newsreels were on hand to record the event, and this footage, which has never been shown in any documentary or made available on any DVD, is housed at the UCLA Film & Television Archive. I recently had a chance to watch it along with Joe Notaro, who first revealed the existence of this footage on his blog, Harry Houdini Circumstantial Evidence. Unfortunately, UCLA does not allow photos, so (like Joe), I'll just have to describe what I saw.

The footage runs approximately two and a half minutes and starts off with various shots of the Success itself. We see a reenactment of prisoners being marched up the gangway. We also see a variety of restraints and torture implements on deck, including a Spanish Maiden (check out Houdini Escapes and Magic page 313 for a similar case).

Following a static card explaining the $1000 challenge, we see Houdini and Captain Smith posing with a group of men. Houdini is wearing a dashing hat (which can be seen here), and is grinning broadly--so much so his upper lip seems to fold over his teeth--a true Cheshire Cat grin. He looks sensational and you can really feel his charisma coming off the screen.

We then see Houdini, having escaped, swimming in the water fully clothed. What's interesting is he's dragging along one of the wax convict figures, as if he broke out his "cell mate" as a joke. I've not found any mention of this wax figure in any newspaper accounts of the stunt. Again, he's smiling broadly the entire time.

Houdini then pulls himself up on a dock, barefoot in sopping wet clothes. Jim Collins stands off to one side with some other unidentified men. Houdini looks powerful and fit as he hitches up his pants and tucks in his shirt. (I'm struck by how he looks very much the same as he does in the 1909 Rochester footage.) Hardeen then briefly steps into frame, waving Houdini forward with a quick jerk of his arm as if saying, "Let's go!"

The final shot shows Houdini posing in an open top car with a large group of men, including Hardeen. Houdini is still wet and grinning broadly. But what's most striking in this shot (and it took Joe and I a few viewings to catch this) is that Houdini's brother Dr. Leopold Weiss is at the wheel of the car! This is the only film footage I've ever seen of Leopold. There the film ends.

This footage offers a remarkable document of this fantastic escape, and of the Success itself. It's also likely the last film footage of Houdini before his mother's death just several weeks later, which was said to have changed him noticeably. So I feel like this escape, and this film, captures Houdini at the zenith of his powers and personal happiness. He feels youthful and exuberant, even standing still he beams. But maybe that's because he just won $1000.

The Success would continue to tour the U.S. for many years. In 1915 it arrived in San Francisco for the Panama–Pacific International Exposition (where Houdini did an overboard box escape). Below is film of Roscoe "Fatty" Arbuckle and Mable Normand visiting at the ship during the exhibition and being shown around by, presumably, Captain Smith himself.

Years later the Success was branded a hoax -- that it was never truly a convict ship. The ship finally met its end by fire near Port Clinton, Ohio, on July 4, 1946.

Today the site of the Success challenge is the 79th Street Boat Basin, operated by the New York City Department of Parks and Recreation. It's still home to boats and even the occasional floating museum ship, just like Success. 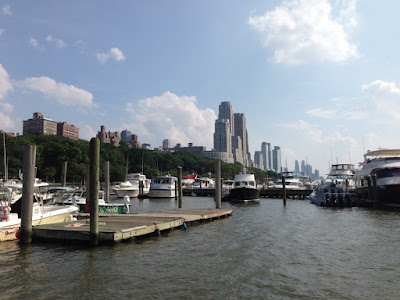 Hope you enjoyed this look back at the Success challenge and the description of the rare UCLA film footage, which I hope can be made available for all to see one day. (If you're interested, the exact catalog listing is HERE.)

But this was not the only film Joe and I watched that day. Check out: A Master Mystery revelation at UCLA.