Here's a photo of what was once H. Richter's Sons Neckwear factory at 502-504 Broadway. This is where young Ehrich Weiss was employed for two and a half years from 1889 to 1891 as an assistant lining cutter. Today it is the site of Bloomingdale's SoHo. 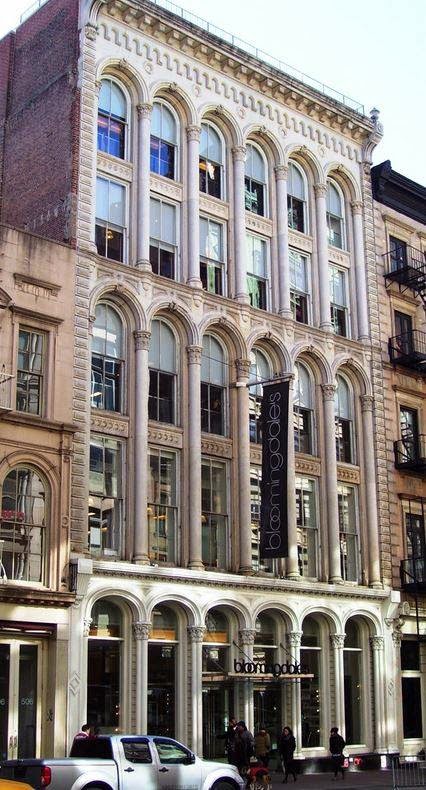 In a story that sounds a little too cute to be true, it's said that Ehrich got the job at Richter's by spotting a long line of applicants waiting behind a Help Wanted sign. He went to the head of the line, removed the sign, and said in an officious voice that the position had been filled and thanked everyone for coming. When the crowd dispersed, he went inside and landed the job for himself.

Far from being a sweatshop as it was characterized in the 1998 Houdini biopic, Richter's was a good job for a young man at the time. Ehrich was even a member of the Neckwear Makers union (he would continue to keep up his dues into adulthood). The Annual Report on Factory Inspection (Volume 14) for 1900 shows Richter's employed 25 men and 75 women (none under the age of 18); hours of labor were less than other clothing firms; and it had logged only one complaint.


Of course, Ehrich was underage when he worked here, so conditions might have been a little rougher in the early 1890s. It's also said that his elderly father worked a bench for a time. It's interesting to note how many young women Ehrich worked in close proximity with for over 2 years, yet there is not a single recorded date or romantic exploit in his life until Bess in 1894.

But might Richter's play an even more important role in the Houdini story? Recall that it was Ehrich's friend and fellow Richter's employee Jacob Hyman who suggested that he add an "i" to the name of Robert-Houdin to become "Houdini." I've often wondered exactly where this momentous moment happened. Might it have been while working across the bench from each other in this very building?

Was "Houdini" born in Bloomingdale's?