In his own time Houdini was often used in political cartoons, such as the Chicago Herald in 1922 depicting “Houdini Sam” suspended in a “Pacific Alliance straight jacket” or the Brooklyn Eagle showing “Congress” boxed in a Houdini-like packing crate marked “Bonus Dilemma” (these can be seen in The Original Houdini Scrapbook

by Walter B. Gibson).

Well, the more things change, the more they stay the same. Check out this modern political “cartoon” that accompanied an article in the Mail Online about British Prime minister Gordon Brown’s perceived political constraints. Headline: Even Houdini couldn't get out of this. 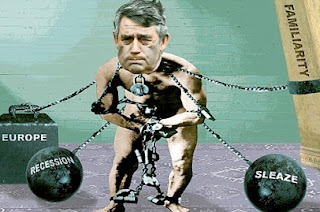