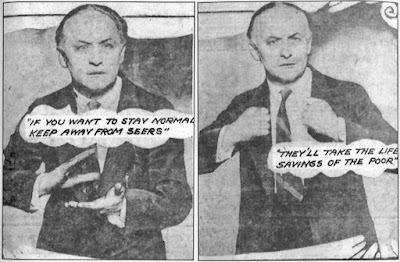 Houdini's spiritualism lecture tour of 1924 does not get much coverage in books. In fact, exactly what his lecture consisted of has never really been clearly spelled out. Yes, Arthur Moses gives a detailed description of Houdini's slide show in his book, Houdini Speaks Out. But Houdini's slide show made up only 30 minutes of what was a full evening talk. So what else went on?

On December 4, 1924, Houdini penned a letter to the Chattanooga Daily Times spelling out exactly what his lecture contained. (This was in reaction to what I called the Chattanooga debacle.) I've transcribed it as published, complete with what Ken Silverman called Houdini's "tortured gammer" and other oddities, such as calling Margery "Margie". (I suspect Houdini dictated this.) Nevertheless, it offers an excellent record of his "Can the Dead Speak to the Living?" lecture.

First and foremost, I am not doing a vaudeville or magical performance. My performance is split up in four parts. For twenty-five to thirty-five minutes I speak about my experiences with the most celebrated or notorious mediums of the world, giving detailed facts of how I as a professional medium in my younger days created sensations in several towns, and then I exposed the methods by which I obtained my information.

I explain and expose minutely how as a passenger on board the S.S. Imperator I gave a séance in which Colonel Teddy Roosevelt and Victor Herbert participated and how I completely baffled them with a secret spirit message from W.T. Steed.

Describing my séance with Lady Doyle in which she purported to obtain a spirit message from my sainted mother.

How I produced two miracles in one day by the most remarkable coincidence that ever happened to a mortal man, and for which I have authentic proof.

I issue my challenge of from $1000 to $5000 in the form of a wager to any medium who will perform three times in my presence whose feats I cannot explain, have duplicated or performed myself.

Second, I present fifty slides in which I am photographed with mediums, the majority of them having long passed away, which shows my intimate contact with these famous miracle-mongers. This runs about thirty minutes, and as I have been investigating over thirty years, I am shown with mediums who are dead almost a quarter of a century, for at one time I was a firm believer, but when they commenced to exchange tricks with me I saw through the mockery of their pretensions.

Part 3. I expose and give on the stage an exhibition of a number of perfection feats in legerdemain, which I have injected for the younger element, and present tricks that I have taken me years to perfect. Incidentally, also showing a mystery on which I made my reputation: the masterpiece of the yogis; the East Indian needle mystery in which I swallow fifty to one hundred needles and bring them up threaded.

I expose the world-famous Dr. Slade's method of slate-writing and explain it to the audience.

I call a committee on the stage and they hold my hands and feet and I show the public how bells are rung, tambourines shaken, under test conditions.

Showing that I can make paraffin hands which the scientists of Europe claim cannot be made except by disembodied spirits.

Showing to the public how Margie, the Boston medium, successfully hoodwinked hundreds of investigators while trying for the Scientific American prize, of which I am one of the committee, showing how she tossed the megaphones in the air while both her hands and feet were being held.

Showing how she caused tables to float in the air, rang bells, and how I detected her fraud, and defy her to produce anything which I cannot explain or duplicate under my test conditions. Margie is the most successful as a conjuring medium of all times.

Explaining how the Spanish nobleman’s son, Argamasilla, successfully fooled the scientists of Europe and prominent newspaper men of America, pretending that he could read through metals.

At the finish of my performance I allow the public the right to question me, any rational question they desire. This, strange as it may appear, makes the most interesting part of my entertainment.


When Houdini refers to his "two miracles in one day by the most remarkable coincidence that ever happened to a mortal man," I believe he's talking about when he started and stopped the rain during a 4th of July party at the home of Bernard Ernst in Sea Cliff, New York in 1922. 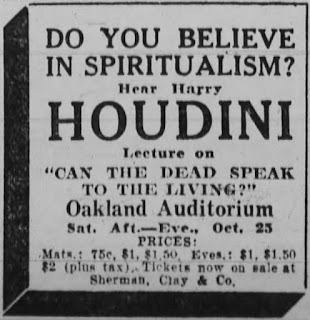 Photos at the top from The Tao of Houdini by Patrick Culliton.