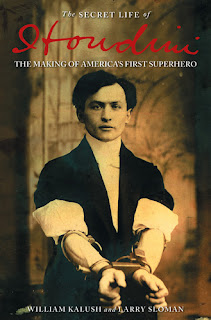 The New York Sun has published an article in which several big names in the Houdini world have commented on the claim from the new book, The Secret Life of Houdini: The Making of America’s First Superhero by William Kalush and Larry Sloman, that Houdini was a spy.

"Some of it may be true," an author and collector of Houdini material, Arthur Moses, said, "but it's hard to believe it's all true." He did say what he has read of the book is meticulously researched and well written.

"I'll believe anything that there's evidence for," a Houdini biographer who is reserving judgment until he has read the book, Kenneth Silverman, said. But he bristled at the suggestion that Houdini's quick rise to fame was partly assisted by police. The new book apparently claims that there was a quid pro quo whereby detectives in Chicago would promote Houdini if he taught them lock escapes and other skills. To the contrary, Mr. Silverman maintained, "He owed his huge reputation to the work he did on stage."

The publisher of Genii magazine, Richard Kaufman, said Mr. Kalush had viewed documents that appear to support the claim that Houdini, if not actually a spy, helped the embryonic British intelligence service gather information.

However, a historian at the Washington-based International Spy Museum, Thomas Boghardt, who has not yet read the book, said British espionage did not start in earnest until 1909. He also said William Melville, the head of Scotland Yard, was principally involved in counterespionage in England rather than spying abroad.

To call Houdini a secret agent "in the James Bond sense" might be taking it a little far, a historian of magic, Richard Kohn, said. "He may well have been an observer who passed along observations." But he also said Houdini was very impressed with himself.

The magician and paranormal debunker James Randi cautioned, "If Houdini had been a spy, that would have gotten out. He never would have been able to sit on it." Mr. Randi said the story of Jasper Maskelyne (1902-1973) — a magician whose skills at deception helped the British defeat the Germans in North Africa during World War II — got out quickly.

Daniel Stashower thinks Houdini makes a good private eye – but in fiction. He has written three mystery novels featuring Houdini as a detective. "The same skills that make him a good magician and escape artist," he said, "also made him an interesting person to cast as a detective because he was naturally good at solving problems and figuring out puzzles."

This book is certainly going to be controversial when it hits bookstores on Halloween.
Written by John Cox at 2:04 PM