Final cover art for The Secret Life of Houdini

From author Bill Kalush comes the final cover art for what promises to be the most intriguing Houdini book of the year, The Secret Life of Houdini: The Making of America’s First Superhero 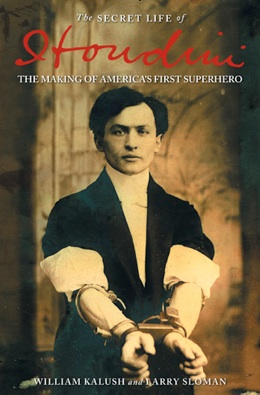 In The Secret Life of Houdini, Bill Kalush and Larry Sloman present their theory that Harry Houdini worked as a spy for both the U.S. and British governments. Bill gave a lecture on his theory at the Magic Collectors convention in Virginia this year. Those who attended said while the idea sounded far-out at first, the author apparently has some pretty strong evidence to support his case.

The Secret Life of Houdini will be approximately 600 pages with over 140 illustrations. The book will also be released as a Simon & Schuster audiobook

I have to confess, this is the most excited I’ve been about a Houdini book since the Silverman biography came out in 1996.

The Secret Life of Houdini: The Making of America’s First Superhero is due for release on October 31 (when else?) and can be pre-ordered now.
Written by John Cox at 1:16 PM