MAGIC goes in search of the Houdini movie

The October issue of MAGIC magazine (with Robert-Houdin on the cover) features an article written by yours truly about the many aborted attempts to make a new big-budget Houdini movie. Here’s a preview from the MAGIC website: 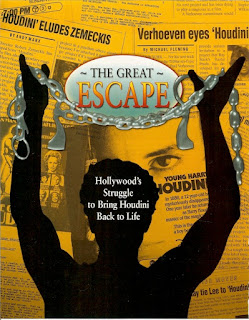 It's been over 50 years since Hollywood produced a feature film about Harry Houdini, the greatest escape artist and daredevil who ever lived. On the surface, this seems remarkable. Houdini's life story is rife with theatrical drama: from his death-defying escapes, to his battle with spirit mediums, to his deathbed promise to return from the grave. So where is the big-budget Harry Houdini feature film?


Visit www.magicmagazine.com to subscribe or buy this individual issue.
Written by John Cox at 6:05 PM