Danger in the Dark: A Houdini and Nate Mystery by Tom Lalicki is released today by by Farrar, Straus and Giroux. The fictional book is the first in what promises to be a series. 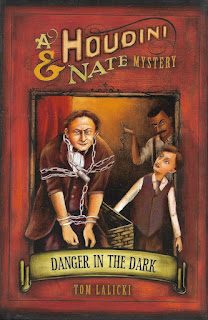 Harry Houdini – the world’s greatest escape artist – is in need of a new hat. That is what brings him to Bennett & Son, Gentlemen’s Hatters of Fifth Avenue, where young Nathaniel G. Makeworthy Fuller is working for the summer. A surprising friendship develops between the world-famous daredevil and the boy clerk, and it comes in the nick of time. A suspicious stranger has recently wheedled his way into the confidences of Nate’s wealthy great-aunt, with whom the boy and his widowed mother live. Now their house is filled with spooky late-night gatherings, the purpose of which is kept secret from Nate. Houdini is just the man to tackle this tangled mystery – and help Nate and his family escape the grasp of an interloper more cunning and dangerous than Nate could have imagined.

A truly captivating historical adventure, Danger in the Dark launches the Houdini & Nate Mystery series with fast-paced plotting and a colorful blend of fact and fiction.


Tom Lalicki is also the author of Spellbinder: The Life of Harry Houdini, a nicely illustrated Houdini biography for children released in 2000.

Danger in the Dark: A Houdini and Nate Mystery can be purchased at Amazon.com.
Written by John Cox at 5:36 PM