Pamela Anderson gets signed Houdini book for her 40th

Pamela Anderson received a twice-signed copy of Houdini’s A Magician Among The Spirits for her 40th birthday. The book was a gift from magician Hans Klok.

The former Playboy playmate and Baywatch star celebrated her birthday last Saturday at the Planet Hollywood Hotel in Las Vegas where she is currently assisting Klok in his show The Beauty of Magic.

Pamela is reported to have let former husband Tommy Lee and photographer David LaChapelle touch the signature for good luck. 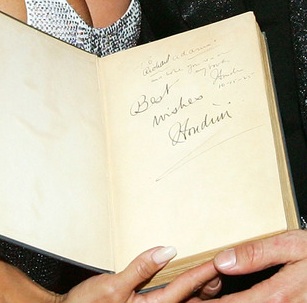 Email ThisBlogThis!Share to TwitterShare to FacebookShare to Pinterest
Tags: A Magician Among The Spirits, Birthdays, Books, Books by Houdini, Other magicians, Pop culture, Writings