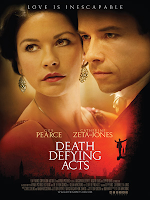 The first review of Death Defying Acts starring Guy Pearce as Houdini and Catherine Zeta-Jones has appeared over at Ain’t It Cool News. While the review isn’t exactly glowing, the reviewer did note that some in the focus group he attended liked the film...so that’s something.

Death Defying Acts is a “supernatural romantic thriller” that tells the fictional story of Houdini’s relationship with a Scottish psychic played by Zeta Jones. It will be released by The Weinstein Co.
Written by John Cox at 5:44 PM