First published in October 2006, Houdini Lives! by Al Blanchard and Adam Steinfeld is a fun fictional novel that finds Houdini alive and well and living in Miami Beach in 1966. Originally available only as an eBook or print on demand, Houdini Lives! is now available on Amazon.com. 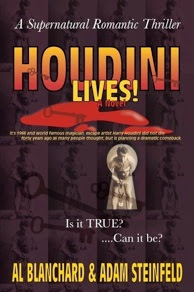 It's 1966, and world famous magician, escape artist, Harry Houdini, did not die 40 years ago as people thought. He's has been in hiding from his political enemies and is planning a dramatic comeback. Who are these enemies from the 1920's, and why are they still trying to kill him? Can Stanford, the young, hip, up-and-coming magician, and his sultry assistant, Solea, save his life? A magician creates a world of wonder and asks people to believe in that world. It is the highest form of entertainment. What is Houdini's secret identity? Will this be his final illusion? Ladies and Gentlemen, prepare for a tall tale of murder, mystery, romance, and political drama. Houdini lives or dies is only a matter of time.