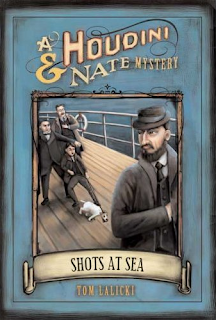 Shots At Sea finds young Nate Fuller and Houdini in action aboard the Lusitania, where a cunning killer tries to assassinate former president Teddy Roosevelt. Nate and Houdini must race to find and foil their suspect before he makes a second attempt.

The first Houdini & Nate novel, Danger in the Dark, was included in the The Bank Street Children's Book Committee’s 2007 edition of "The Best Children's Books of the Year."

Shots At Sea can be purchased on Amazon.com. Details on the entire Houdini & Nate series can be found at the official Houdini & Nate website.
Written by John Cox at 8:43 AM