Whoops! This one slipped right past me. A new book, Houdini's Shadow, by Leo Brent Robillard was released in March of this year. 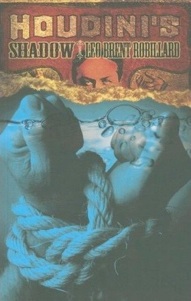 Houdini's Shadow tells the story of Jake O'Sullivan, a young man possessed by a fatal childhood fascination with Harry Houdini. After seeing one of Houdini's 1912 performances in New York City, Jake realises that to "escape – to tempt death – is to live. Is to understand existence." While it's hard to believe that someone as young as Jake could come to such a substantial realisation, it becomes clear that he does not simply wish to escape from sealed milk containers, or unlock the chains around his wrists at the bottom of the St. Lawrence. Rather, he hopes to escape from his past, the failures of his pugilistic father, the failures of his own life as he grows into a young man, clinging helplessly to his dream of becoming a famous escape artist.


Houdini's Shadow can be purchased from Amazon.com.
Written by John Cox at 5:54 PM