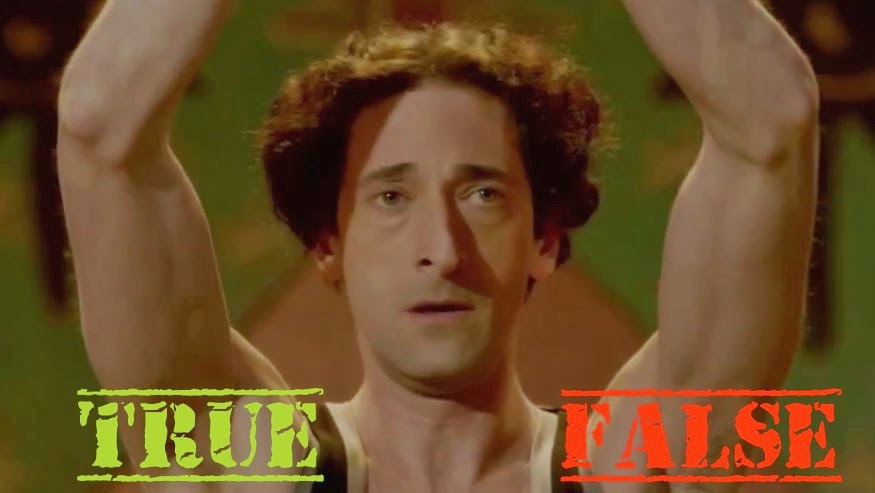 Part One established HISTORY's Houdini as the least accurate Houdini biopic ever made. However, the miniseries redeemed itself in Night Two which, finally free of the silly spy movie narrative, was able to focus on the events of Houdini's real life and even right some wrongs of earlier biopics. For those who'd like to separate fact from fiction, we continue our fact check of HISTORY's Houdini.

Was Houdini's brother also a magician and escape artist?
Houdini was very close with his younger brother Theo a.k.a. Dash. In November of 1900, Houdini invited Dash to come to Europe where he set him up with a complete act and named him Hardeen. The idea was for Dash to take bookings in theaters and circuits that Houdini didn't play, and the brothers could effectively shut out the many cheap imitators of the escape act. This worked well and Hardeen established himself as a popular and credible escape artist in his own right. While the brothers sometimes posed as "rivals" for the press -- and might have had a few moments of genuine competition -- they were not rivals as shown in the miniseries. Dash left show business to run Houdini's film developing lab in New Jersey in 1916. After Houdini's death in 1926, Hardeen inherited his brother's props and resumed his magic career until his own death in 1945. (Read: Houdini vs. Hardeen in Oakland.) 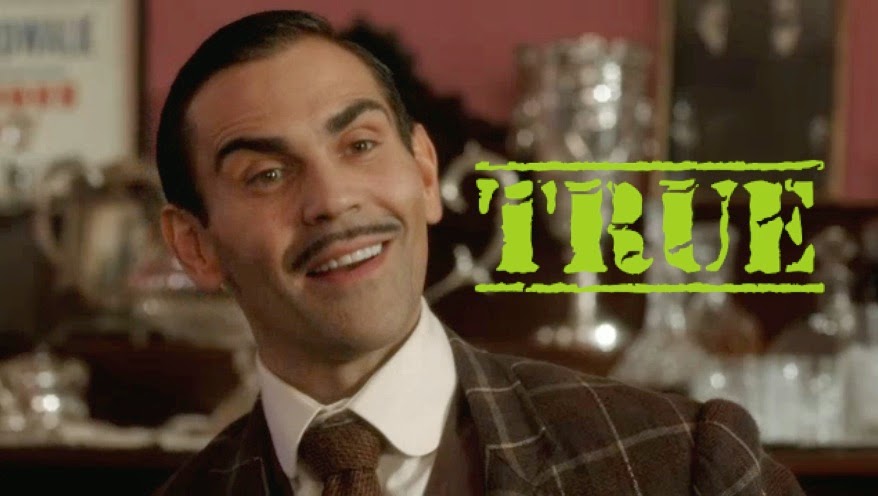 Did Houdini give up doing escapes for his wife Bess?
While Houdini would sometimes comment to reporters how his wife would like him to give up his dangerous work, there is no evidence that this was an actual issue in their marriage, and Bess was fiercely supportive of her husband in all his career endeavors. Houdini never stopped doing escapes. 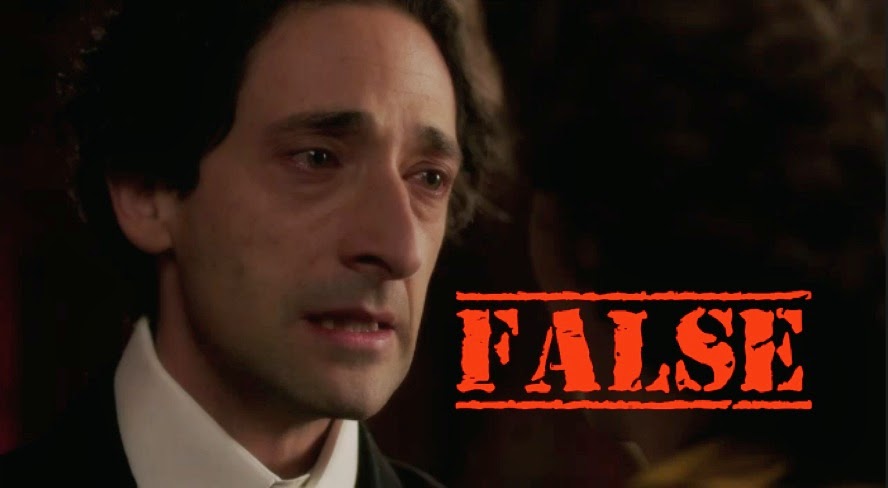 Did Houdini make an elephant disappear?
Houdini performed his Vanishing Elephant during a record-breaking engagement at New York's Hippodrome Theater in 1918. But unlike in the miniseries, Houdini vanished his elephant in a gigantic box made to look like a circus wagon. Houdini later revived the illusion using a smaller elephant for live appearances at the Time Square Theater to promote his film, The Man From Beyond. How exactly Houdini made his elephant vanish is still debated today. (Read: 100 years ago Houdini vanished an elephant.)

Did Houdini walk through a brick wall?
Houdini did indeed walk through a brick wall in July 1914, although he performed the illusion at Hammerstein's Roof Garden Victoria Theater in New York, and not in London as shown in the miniseries. Houdini only performed the effect for a short time before turning it over to his brother Hardeen. Yet it left such a strong impression that he is still called "the man who walked through walls" today. As to whether the method shown in the miniseries is the correct one... I'm not saying. (Read: When Houdini walked through a brick wall.) 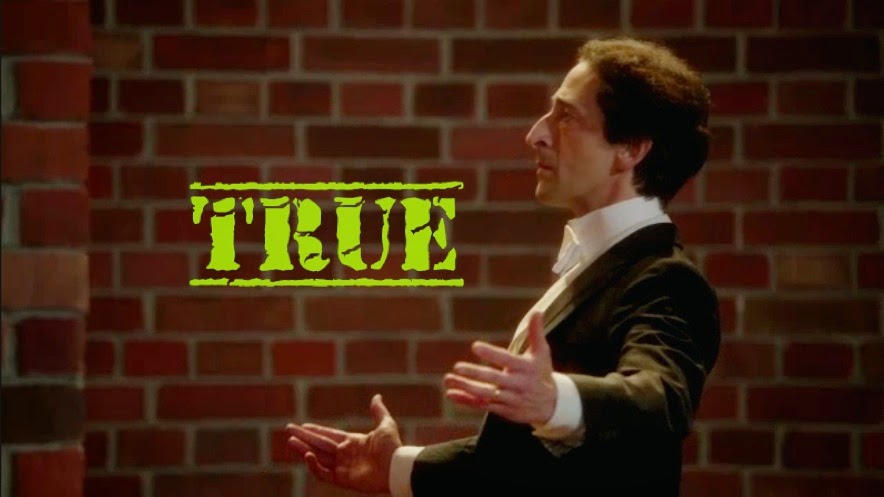 Did The Houdinis perform as spiritualists early in their careers?
It is true that Harry and Bess worked briefly as spiritualists, and it's said Harry even called out the identity of a murderer from the stage one night. (The man jumped up and fled the room.) The parents who confront the Houdinis backstage are based on a mother who did accuse Houdini of black magic when he predicted that her son would fall from his bicycle and break his arm. Houdini had earlier seen the mother scolding the boy for riding recklessly, and prediction had inexplicably come true. After this, Houdini gave up the spiritualism act. (Read: Meet the Robinsons.) 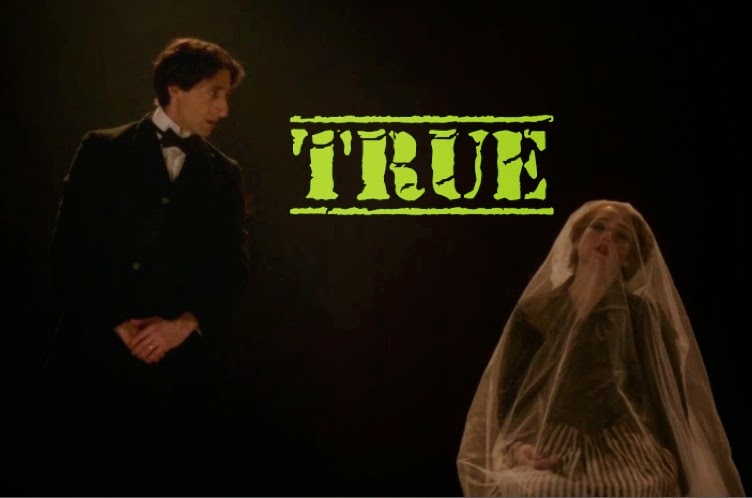 Did Houdini star in silent movies?
Houdini did indeed have a career in silent movies between 1918 and 1923. He made a successful 15-part serial called The Master Mystery; two feature films for Famous Players-Laskey Paramount, The Grim Game and Terror Island (the clip we see in the miniseries is actual footage from The Grim Game); and two films for his own production company, The Man From Beyond and Haldane of the Secret Service. He also owned and operated a motion picture film lab in New Jersey. The Houdini miniseries is the first biopic to acknowledge Houdini's film career. (Read: Houdini's rough ride at Niagara Falls.) 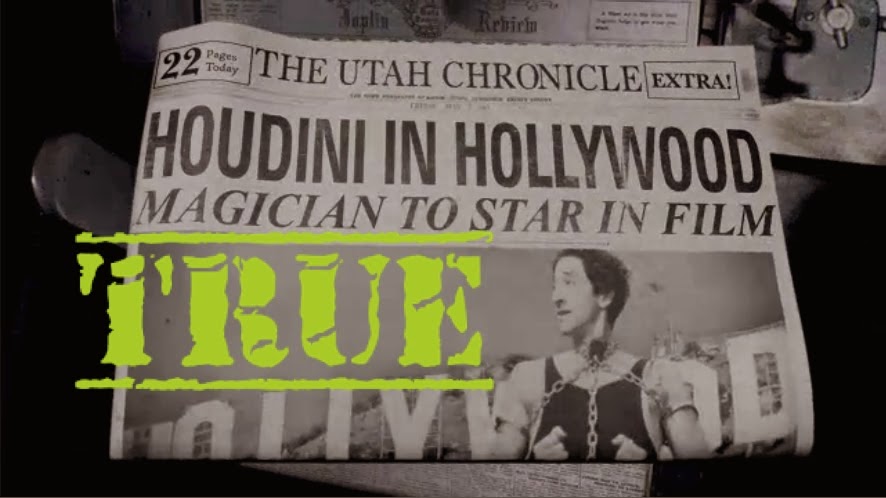 Was Houdini ever tied to a cannon?
Houdini was bound to a cannon in almost exactly the manner as depicted in the miniseries (kudos to technical advisor David Merlini) on two occasions. The first was in England in 1911 when he was challenged by the Royal Navy. The second was in Los Angeles' Pershing Square in 1919. During this second challenge, authorities stepped in and would not permit the cannon fuse to be lit. (Read: Houdini's Cannon Challenge.) 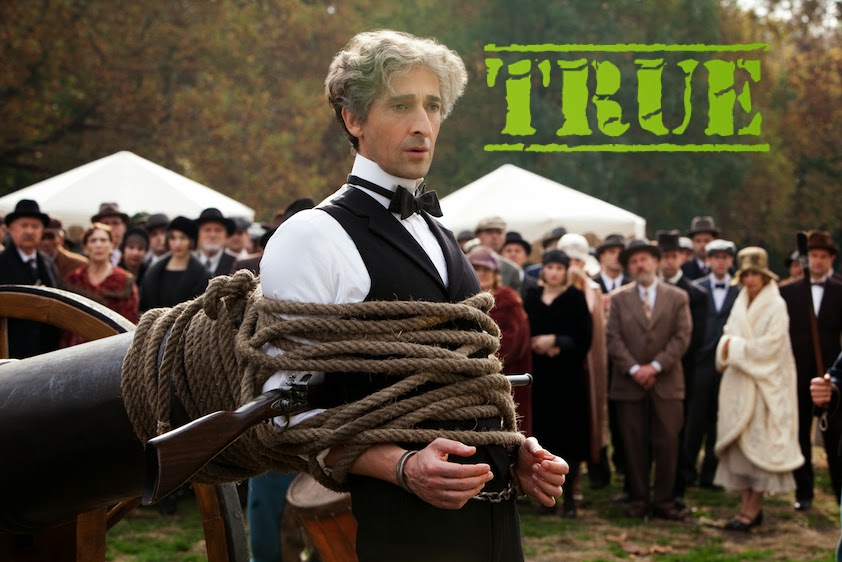 Did Lady Doyle give Houdini a seance in which she contacted his mother?
It is true that in 1922 Sir Arthur and Lady Conan Doyle gave Houdini an automatic writing seance that supposedly contacted his mother. In fact, the words Lady Doyle speaks in the miniseries is largely verbatim. It's also true that Houdini did not accept the seance as legitimate. The three tells were that his mother's spirit made the sign of the cross (she was Jewish), wrote in English (she spoke German), and there was no mention that the day before was her birthday (not Houdini's birthday as shown in the miniseries). This seance was the beginning of the end of Houdini's friendship with Sir Arthur Conan Doyle. (Read: The Mama message.)

Did Houdini crusade against fraudulent mediums?
It is true that during the final years of his life Houdini exposed fraudulent mediums, both on stage and by going to seances in disguise. He also employed a small "secret service" of investigators who would go to seances on his behalf and bring back information. He testified in front of Congress in support of a bill to outlaw fortune telling in the District of Columbia. He published a book on his investigations called A Magician Among The Spirits. (Read: Houdini, the Hillstreet, and the birth of a ghostbuster.)

Did Margery try to seduce Houdini in his hotel room?
While Mina Crandon a.k.a. "Margery" fostered intimate relationships with some members of the Scientific American committee that investigated her in 1924, there is no evidence that she ever tried or even had the opportunity to seduce Houdini. Of her well recorded charms, Houdini said, "Her applesauce means nothing to me."

UPDATE: In the new book The Witch of Lime Street: Seance, Seduction, and Houdini in the Spirit World, author David Jaher reports that Margery did indeed attempt to seduce Houdini when she allowed the magician to take a nap in her son's bedroom. (Read: Houdini and Margery in the apple orchards.)


Did Margery put a curse on Houdini?
Following her exposure, it was widely reported in the press that Margery had put a "curse" on Houdini. Margery denied it and blamed Houdini for planting the story himself (which he almost certainly did). However, private correspondence shows that, during a seance, Margery's spirit guide Walter predicted that Houdini would die on December 25, 1925. Houdini survived the prediction by 10 months. (Read: Margery's curse.)

Did Houdini break his ankle in the Water Torture Cell?
It is true that Houdini broke his ankle while being raised from the stage during a performance of his Water Torture Cell at the Capitol Theater in Albany NY on October 11, 1926. Unlike what's shown in the miniseries, he did not continue with the escape, but was tended on stage by a doctor. Houdini cut the USD from his show and never performed it again. He died 20 days later. (Read: Houdini's Water Torture Cell accident.) 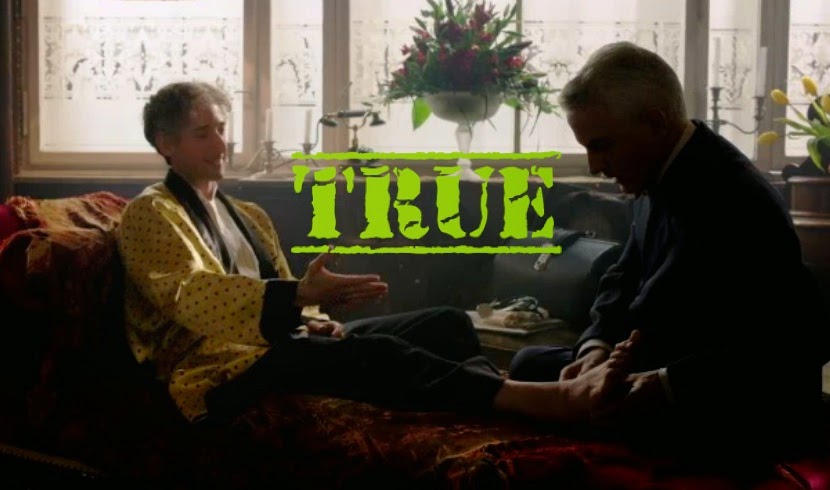 Did Houdini invite people to punch him in the stomach?
This has become an ingrained part of Houdini lore and is shown many (many!) times in the miniseries, but there is scant evidence that Houdini invited people to punch him in the stomach throughout his life. The first record of such a punch/challenge was a week before his death during a lecture at McGill University. This may have inspired the later punch in his dressing room that would prove to be so damaging. (Read: The Pickleman punch.)

Was the man who punched Houdini a supporter of spiritualism?
While Houdini historians love to debate the motives of J. Gordon Whitehead (named "Kelly" in the miniseries), the two eyewitnesses to the infamous dressing room punch did not indicate that there was any talk about spiritualism, and Whitehead did not scream out any accusations. The official record says that Whitehead asked if it was true Houdini could take a blow to the stomach, and then set about hitting him before he was ready. Even Houdini said it was an accident. However, Whitehead's later life revealed that he had tangential connections to the spiritualism movement and also suffered mental problems. He died in 1953 after living many years as a hoarder. (Read: Is this J. Gordon Whitehead at McGill in 1926?) 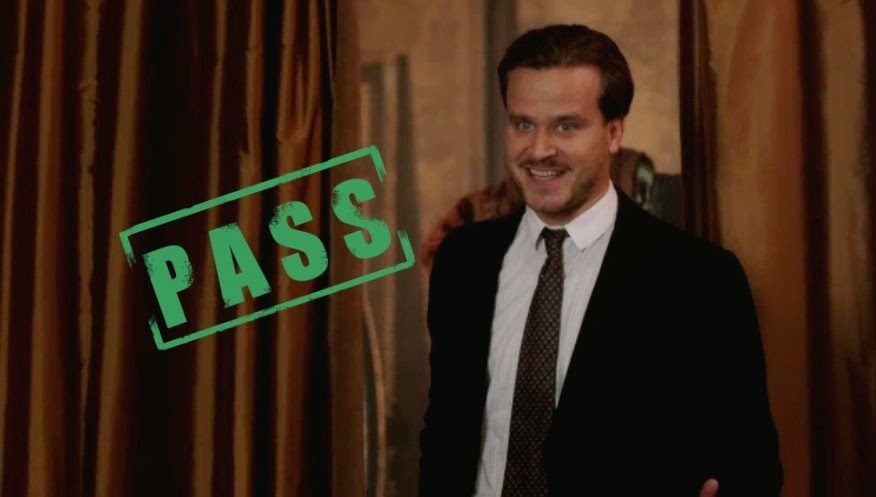 Did Houdini collapse on stage during his final performance?
Houdini actually made it through his entire final performance at the Garrick Theater in Detroit on October 24, 1926. Despite having a ruptured appendix and a 104 degree temperature, he concealed his illness from the audience (although some said they could tell something wasn't right). Even after the show, Houdini still refused to go to the hospital. He returned to his hotel and only after having a phone conversation with his own doctor in New York did he allow himself to be taken to Grace Hospital. (Read: 85 years ago: Houdini at the Garrick.)

Did Houdini die on Halloween?
Houdini did indeed die in Room 401 of Grace Hospital in Detroit on Halloween of 1926. The bedside conversation we see Houdini having with his doctor about being a "fake" is also true. Houdini died with his brother Theo (Hardeen) by his bedside at 1:26 p.m. (Photos of the hospital room here.) 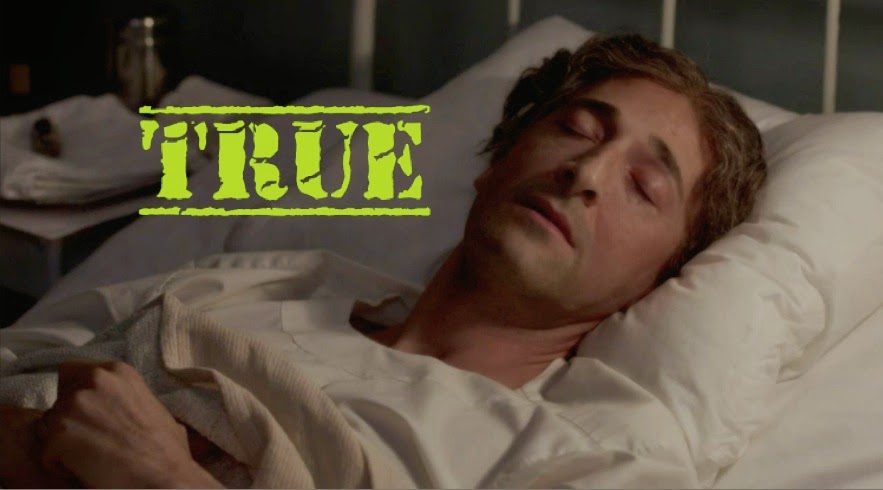 I hope you found this Fact Check of HISTORY's Houdini helpful. If there's anything I didn't cover, please ask in the Comments below and I will answer you there. I will be posting my full review of the Houdini miniseries tomorrow.