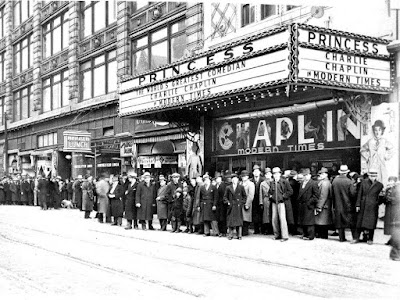 Of course, Houdini buffs know the Princess as the theater where Houdini was punched in the stomach by McGill University student J. Gordon Whitehead. That punch played a role in the great magician’s death.

The Princess building is located on St. Catherine Street, just east of Phillips Square. It operated under several different names. In its later days it hosted the first Montreal Film Festival and then became a discount cinema that showed non-English language movies.

The site also also posted this photo of the long gone Prince of Wales Hotel where Houdini is said to have been struck a second time in the lobby while reading a paper.

Plans posted on the now shuttered Princess building show that it will be converted into a food court. Frankly, I'm amazed the original building lasted as long as it did!

Thanks to Jim Keegan for alerting me to the photo of Houdini's correct Princess Theater. The photo on Coolopolis appears to be an early incarnation that burned down in 1915.
Written by John Cox at 8:21 PM