The other night I watched the excellent American Experience documentary, Murder of a President, about President James Garfield and his assassination just 200 days into office in 1881. I really knew nothing about Garfield and the documentary was extremely enlightening.

The documentary also covered the troubled life of the assassin, Charles Guiteau, and I sat up when this reenactment of Guiteau in his prison cell came on screen. Why should this be of interest to Houdini buffs? 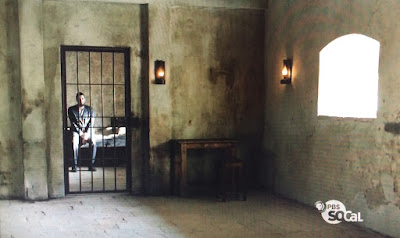 In 1906, Houdini famously escaped from the United States Jail in Washington, D.C. The "Murderers Row" cell he was confined in was the same cell that had held Guiteau while he awaited execution. The United States Jail is long gone and I've never seen a photo of the Guiteau cell, so it was fun to see it in this reenactment, although I have no idea how accurate this is.

For a detailed account about Houdini's Washington D.C. jail escape, check out my blog from last year: 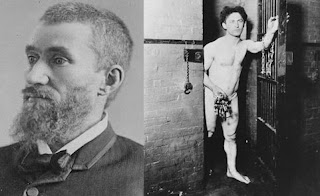 You can watch the American Experience Murder of a President online at PBS.org.

Here are a few more links to enjoy on this Presidents Day.


UPDATE: Here are some other, potentially more accurate depictions of the Guiteau cell (thanks to Perry Reed). 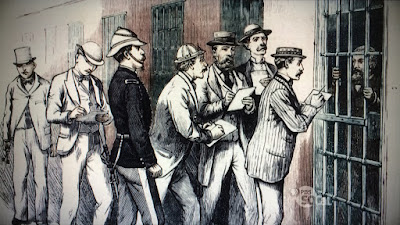 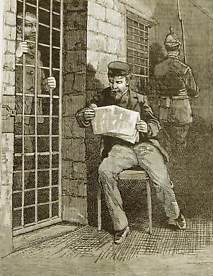 Handcuff expert Joe Fox shares another Houdini-Guiteau association. The photo below was taken by Mark Lyons at the 2004 Great Houdini Auction in Las Vegas and show "Guiteau" cuffs in a Houdini display case (now in the David Copperfield collection). 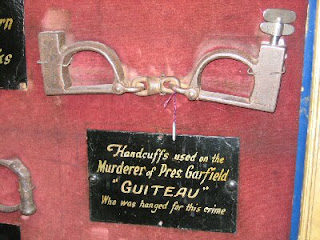