The Arcanum gets a director 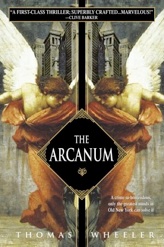 Looks like we’re one step closer to getting another (fictional) movie featuring Harry Houdini. Cinematical reports that writer/director Randall Wallace (The Man in the Iron Mask

) has signed aboard Gold Circle’s The Arcanum.

Based on Thomas Wheeler's fantasy-adventure novel, The Arcanum

Wheeler penned the screenplay which was first purchased by Miramax in 1999. Gold Circle acquired the property in 2004. Wallace will now polish the script before sending it out to casting.
Written by John Cox at 7:36 AM