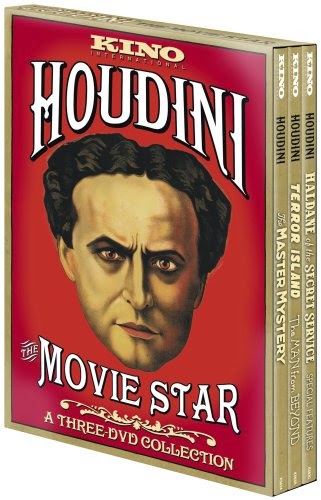 Great news for fans of Houdini’s silent movie career (like myself)! On April 8, 2008, Kino International will release ALL of Houdini’s surviving silent films in a single DVD box set.

will include The Master Mystery (Episodes 1-15), Terror Island, The Man From Beyond, and, for the first time ever on any home video format, Haldane of the Secret Service.

And there’s more. The set will also include a 5 minute fragment from The Grim Game (at the moment, the last “lost” Houdini film), filmed records of Houdini escapes from 1907 to 1923, audio recording of Houdini speaking, excerpts from the NY Censor Board files (not sure what this is), Slippery Jim, a 1910 Houdini-inspired comedy, footage of Metamorphosis being performed by Houdini s brother Hardeen, photo galleries, and film notes.

Houdini The Movie Star can be pre-ordered now on Amazon.com