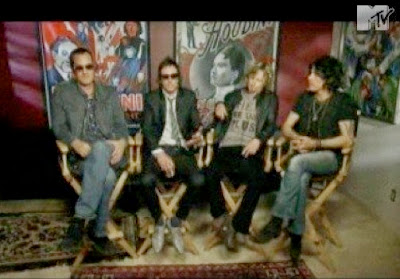 The fabled "Houdini Estate" in Laurel Canyon was the site last night for a reunion concert by Stone Temple Pilots. I can personally attest to this. I live on the same street and I had to show my address to police, who had cordoned off the street, in order to get home. I figured it was a party...or the most rockin' Houdini séance the house ever saw!

According to Billboard, the group's 30-minute set was the first since disbanding in 2002. Frontman Scott Weiland said the concert's setting at the "Harry Houdini Estate" had special meaning to the band.

"We shot our video for 'Creep' here in the early '90s -- yeah, we're old," the singer joked, noting that the Gus Van Sant-produced clip never saw the light of day. "It looked like an Obsession commercial, which is cool, but it wasn't what we wanted to portray."

The 3.5 acre property, which was recently purchased and is undergoing restoration, includes a 2bed 2bath guest house, stone walkways, staircases, fountains, caves, and a natural spring.

A video of the appearance can be viewed on YouTube. For the history of the Houdini Laurel Canyon property, click here.
Written by John Cox at 1:26 PM