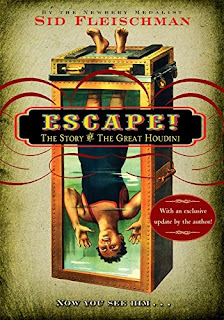 A trade paperback edition of Sid Fleischman's carefully researched 2006 book ESCAPE! The Story of the Great Houdini is released today.


The paperback contains a new chapter, "The Restless Ghost", in which Sid addresses the notion that Houdini was a spy and/or murdered. His conclusion: "It's nonsense, of course."

You can purchase the updated ESCAPE! The Story of the Great Houdini on Amazon.com.