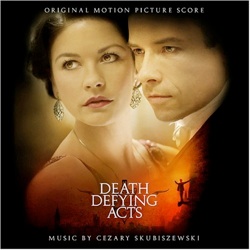 The original soundtrack to the new movie Death Defying Acts

has been released on CD and can be purchased at Amazon.com

Death Defying Acts stars Guy Pearce as Houdini and Catherine Zeta-Jones as a Scottish psychic out to claim the magician’s $10,000 prize for genuine communication with the dead.

The film is due for release in New York and Los Angeles on July 11.
Written by John Cox at 5:47 PM