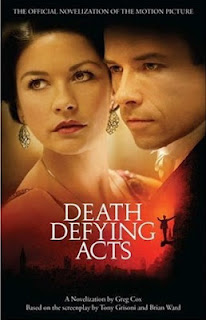 A novelization of the new movie Death Defying Acts

will be released on July 15. The book is a paperback published by Pocket and written by Greg Cox.

Death Defying Acts stars Guy Pearce as Houdini and Catherine Zeta-Jones as a Scottish psychic out to claim the magician’s $10,000 prize for genuine communication with the dead. The film is due for release in New York and Los Angeles on July 11.

This is the second novelization of a Houdini film, the first one being for the TV movie The Great Houdinis in 1976.