Now you see him, now you don’t 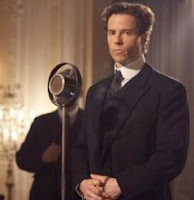 It looks like Death Defying Acts limited engagement was very limited indeed. The film played on only two screens in New York and LA for only one week.

It's a shame The Weinstein Company, who reportedly paid $5.5 million for the distribution rights, didn't do more to support the film. I thought it was pretty good.

For those who missed it, never fear. I expect Death Defying Acts will make an amazing reappearance on DVD. When we get news of exactly when that might be, we will let you know.
Written by John Cox at 5:30 PM