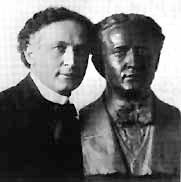 The Official Houdini Seance was held last night in the Black Box Theatre of the Dorothy Young Center for the Arts. The 101-year-old Young, who worked as an assistant to Houdini during his 1925 tour, participated in the seance alongside organizer Sidney Radner.

“It's still an honest attempt to see if we can contact Houdini,” said Radner, who brought a pair of Houdini's handcuffs which Houdini said he would open, if he could, from beyond the grave. Radner noted. “We would be satisfied right now if it was put on a table and then he comes back in a physical way, he moved it across the table and it fell on the floor, or something like that.”

Last night’s seance was conducted by psychic Jane Doherty of South Plainfield, who investigated the Massachusetts home of accused ax murderer Lizzie Borden and said her stomach expands by several inches when spirits are present.

“I think now, the point of doing it is really to honor (Houdini's) memory,” said Barbara Parker, who is the granddaughter of Dorothy Young. “(Dorothy) talks about the Houdinis as being her second parents during that period of her life.”

Source: The Star-Ledger
Written by John Cox at 9:23 AM