This one slipped right past me, but in September Townsend Press released a new Houdini paperback biography for young readers, The Amazing Harry Houdini 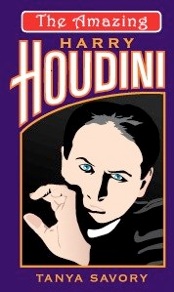 Harry Houdini escaped from prison cells, swallowed needles, and made elephants disappear. How did he do such amazing tricks? Some people believed he was actually a wizard with secret powers. But Houdini knew his only “secret powers” were hard work and imagination. This is the story of the poor boy who grew up to be the most famous magician in the world. He was fearless and determined to amaze his audiences, and there seemed to be no limit to the risks that The Great Houdini would take.


You can order The Amazing Harry Houdini from Amazon.com.

For more information about Townsend Press visit their official website.
Written by John Cox at 10:29 AM