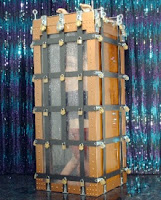 Illusion builder Richard Sherry of Sherry and Krall Magic has recreated a full size version of Houdini’s “Caged Water Torture Cell.” The cell is not based on the actual cell, but on an exaggerated version used on one of Houdini’s promotional posters. Sherry calls it his “crowning achievement.”

Sherry has also created several different working Torture Cells for the escape artist. There is a relatively faithful wood finish cell (although much larger than Houdini’s original), and an assortment of “modern versions” with different finishes. All can be seen and purchased, along with many other inventive escapes and illusions, at Sherry and Krall Magic. 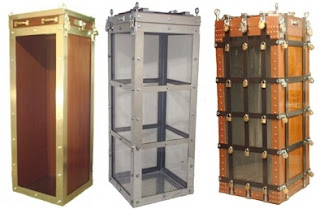