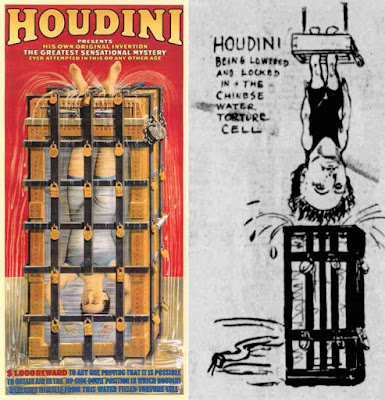 Recently I found two pieces of evidence that suggest Houdini did perform the Water Torture Cell with this cage of locks when he was touring the U.S. in 1915-16, right around the time this lithograph was created.

The first piece of evidence comes from the Baltimore Evening Sun, April 27, 1915. The paper features an artist's illustration (above) of The Water Torture Cell as seen at the Maryland Theater. It looks very similar to the caged cell of the poster. And this illustration was done before the creation of the Strobridge litho, so it could only have come from life.

The next piece of evidence is even more compelling. In a January 29, 1916 review of Houdini's performance at the Majestic Theater in Houston, the Water Torture Cell is described as having "solid steel cage" with "22 locks"! 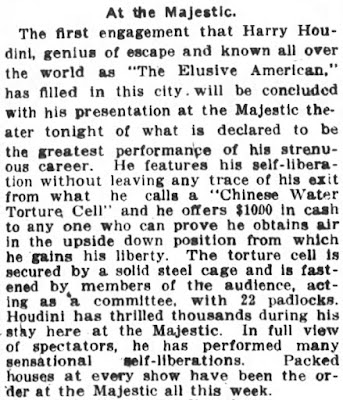 This leads me to believe that the Water Torture Cell went through a few incarnations, as did many of Houdini's escapes. We know he originally used an inner cage (or "steel grill" as he calls in in the uncut voice recordings). I'm thinking this may have been the next evolution; the inner cage was replaced by an outer cage of locks. How long Houdini did it this is unknown, but we know by the time of 3 Shows in One, the cell appeared on stage as we know it today. 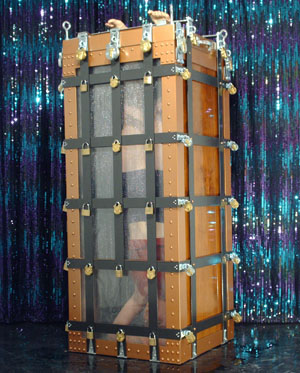 "My Grandmother saw Houdini when she was a teenager. She often spoke of him and Shirley Temple as I was growing up. When we watched Henning's Water Torture Cell on television she said to me that's not what Houdini's looked like. It looked like a jail cell with many locks. I thought it was time for her to take her medicine but maybe, just maybe it wasn't!"