Artwork from Bertozzi's Houdini: The Handcuff King on display in L.A. 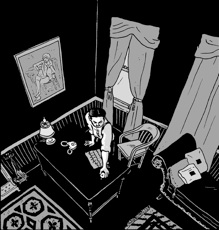 A sequence of images from Houdini: The Handcuff King

by Nick Bertozzi and Jason Lutes are on display as part of the “Monsters and Miracles: A Journey through Jewish Picture Books” show at the Skirball Cultural Center in Los Angeles.

The show is up until August 1, 2010 and then travels to the Eric Carle Museum in Western Massachusetts.

Released in 2007, Houdini: The Handcuff King recently won the 2010 Garden State Teen Book Award “Nonfiction” section. It can be purchased in hardcover and paperback from Amazon.com