I'm reviving this post from March 31, 2018 to highlight a major update.

Over the years there have been several photos that claim to be the last taken of Houdini. Now here's another! 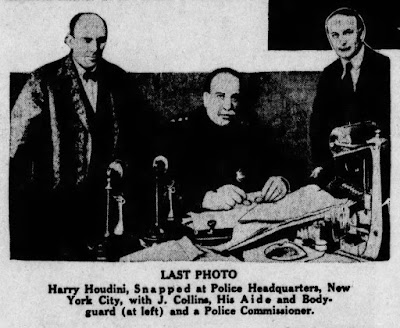 The best known "last photo" appears on page 179 of NOTES to Houdini!!! by Ken Silverman. It shows Houdini flagging the start of an auto race in Worcester, MA. The caption on the above photo says it was taken in New York City, which puts it before Worcester and would seem to preclude it from being the last. However, Houdini did lecture at a police headquarters in Montreal on the morning of October 19 (before his McGill lecture), so maybe this is actually a photo from that?

I found this after David Charvet shared an intriguing tip from someone on Facebook that the Detroit News ran what it claimed to be the "last photo" in a Rotogravure insert sometime in the 1930s. This isn't from the Rotogravure. This appeared as part of syndicated article by Rose Mackenberg ("Exposing the Weird Secrets of Mediums and Spirits") which ran in April-May 1929. But Rose would be in a position to know what Houdini's last photo was, so I think this is a viable candidate. If nothing else, it's likely the last photo of Houdini and Jim Collins together.

UPDATE: Reader Tom Frueh has taken up the challenge of determining where this photo may have been taken and has turned up some interesting information that supports Montreal. Below is Tom's email and photo. 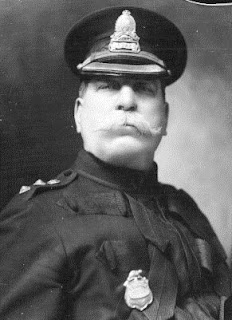 I started looking more closely at the police station photo for clues as to whether it was taken in New York or Montreal. I noticed the 3 distinctive buttons on the right shoulder of the police officer, and then started searching for historic photos of Montreal police uniforms (assuming I'd find little if anything). This turned up (among other things) a Wikipedia article about the Montreal police and in that article there was the attached pic - a man named Pierre Belanger who was the Director of the Montreal Police from 1921 to 1928. This COULD be the man in the Houdini and Collins photo (with walrus mustache trimmed down), and without his hat, but whether it is or isn't, it has those distinctive shoulder buttons and the badge looks like it may have the shape of the Canadian badge Belanger is wearing.

I also searched for old NYC uniforms and didn't turn up any with these shoulder buttons (or any). Of course, that doesn't mean there weren't any, and all these uniforms went through a wide assortment of variations. The pic of Belanger also has his badge on the right (with the little Canadian beaver on top) and I thought that might also be a clue, but so far, all the other vintage photos of both Canadian and New York policeman have the badge on the left. So who knows?

Anyway, I thought those buttons might be the missing clue that MIGHT possibly put the police office photo in Montreal. But again, it's conjecture. Still, I thought it interesting enough to share with you.


UPDATE (4/28/20): Today we have a second very exciting update thanks to Martin Bérubé who recently published a piece about Houdini's death at PropsMontréal. During his research Martin uncovered this front page of the October 19, 1926 La Patrie where the original photo first appeared. The caption confirms this was taken at Montreal Police Headquarters on October 18, 1926 (and, yes, that is Pierre Belanger). So that pretty much nails this down as the last photo of the living Houdini that I am aware of. Thank you Martin! 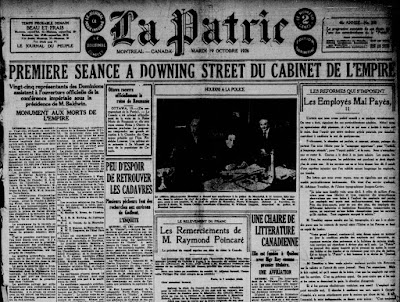 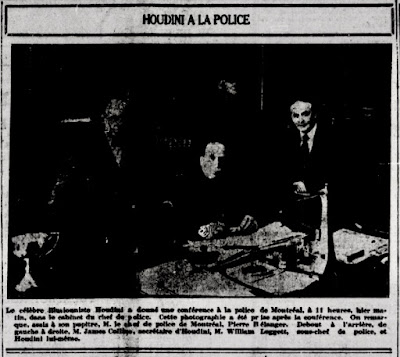 Translation of photo caption (by David Byron): "The famous illusionist Houdini gave a talk to the Montreal police at 11 o’clock yesterday morning at the office of the chief of police. This photograph was taken after the talk. One sees, seated at his desk, the Montreal Chief of Police, Mr. Pierre Belanger. Standing behind, from left to right, Mr. James Collins, Mr. Houdini’s secretary, Mr. William Leggett, Deputy Chief of Police, and Houdini himself."