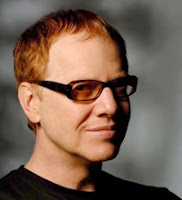 I was in the audience yesterday when Danny Elfman told a packed audience at the San Diego Comic-Con that he is still working on his score to a Broadway musical based on the life of Houdini.

However, Elfman said the nature of large Broadway shows like this can be “tumultuous” and he couldn’t say when, or if, the show will see the stage. But he said he is enjoying the work and the collaboration with “some very good people.”

The Elfman Houdini musical was announced back in April 2008 for a Spring 2010 debut, but little news has been available about the status of the project.

This was Elfman’s first appearance at Comic-Con, and he received two standing ovations.
Written by John Cox at 3:25 PM