Days of Thrills and Laughter released on DVD 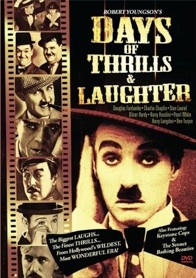 Days of Thrills and Laughter is released today on DVD by VCI Entertainment.

The 1961 documentary feature takes an affectionate look back at the silent era and includes footage from Houdini's 1922 film The Man From Beyond. While Houdini appeared on the original promotion material, looks like he didn't make the cover of this DVD, although he is name-checked on the back.

Purchase the Days of Thrills and Laughter DVD from Amazon.com.
Written by John Cox at 10:38 AM

Email ThisBlogThis!Share to TwitterShare to FacebookShare to Pinterest
Tags: 1960s, DVD, Movies, The Man From Beyond (1922)