“The book I'm working on is tentatively entitled Harry and Bess - Marie Hinson Blood's life with The Great Houdinis. We decided to aim the publication at the adolescent market because Marie was only days shy of her ninth birthday when Harry died, and because a portion of the book's proceeds will go to the Society Of American Magician's youth chapter, with which Marie was heavily involved. 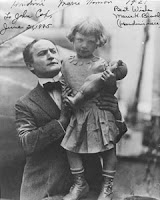 As you may be aware, after Harry's death, Bess moved in with Marie and her parents. Marie inherited Houdini's bedroom suite, and slept in his bed until she married Forrest. As a youngster, she frequently resided with the Houdinis in Harlem, and went as far as Detroit to appear as a "child volunteer from the audience" in Houdini's shows, something she did several times.

I put the project aside for several years for a variety of reasons, Marie's declining health and my own, chief among them. I am slowly getting the book together again, though. Over the last couple of months I've been gathering items from Jeff [Blood], and hope to include a good many photo illustrations in the work. I plan, at this stage, to publish the work through Ars Praestigium (we have a few others on hold as well), then attempt to shop it out to a big publishing house.”


This sounds like something very special! We’ll keep you updated.