Hollywood home rumored to be Houdini residence for sale 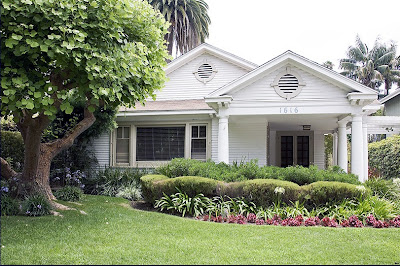 A Hollywood home “rumored” to have once been a residence of Houdini is for sale. The 4 bedroom house was built in 1918 and is located at 1616 N. Curson Ave. between Sunset and Hollywood Blvd.

While Houdini is known to have rented a (now demolished) house in nearby Laurel Canyon while he made The Grim Game and Terror Island for Famous Players/Paramount, there is some credence to this being another residence.

In the well-researched book The Story of Hollywood

, author Gregory Paul Williams notes on page 78 that “the renowned magician Houdini occupied a cozy craftsman in the Gardner Tract while acting in movies.”

The book doesn’t give an address, but this is a craftsman style house in the Gardner tract (and a beautiful one at that). The current owner, who grew up in the house, says his parents always told him Houdini once lived there.

UPDATE: Local Houdini expert Patrick Culliton tells me this was actually the house occupied by Bess Houdini and Ed Saint sometime after the 1936 Final Houdini seance. Says Patrick, “Houdini was never in that house. But old-timers told me of visiting Bessie and Ed at 1616 N. Curson.”