The Mysteries of Myra novelization 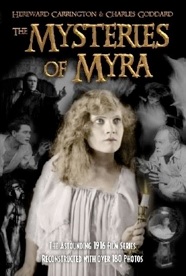 The “long lost” novelization for the 1916 serial The Mysteries of Myra, for which Houdini served as technical consultant, has been restored and is available to purchase as a paperback or hardback from the NEW Mysteries of Myra website.

The novelization is co-credited to Hereward Carrington, a paranormal investigator and Houdini colleague who later published the book, Houdini And Conan Doyle: The Story of a Strange Friendship.

Houdini’s consultant credit on The Mysteries of Myra is generally considered his first real foray into “Hollywood” cinema.
Written by John Cox at 10:43 AM