Michelle Ann Kratts, author of The Missed and a researcher and tour guide at the historic Oakwood Cemetery in Niagara Falls, has uncovered some very interesting information about Houdini filming The Man From Beyond at Niagara Falls in early May 1921. While Houdini had knack for charming local police and reporters, that seems to have failed him on this particular trip.

Houdini arrived in Niagara Falls with a film crew of 16 people, including director Burton King and five cameramen. They were there to shoot the climax of the film, which sees Howard Hillary (Houdini) saving Felice Strange (Jane Connelly) from going over the falls in a canoe. Not only did Houdini film himself swimming the rapids, but the production also maneuvered two canoes along the waters with stunt dummies doubling Houdini and Connelly aboard. Whatever faults Houdini's films have, the Niagara Falls sequence in The Man From Beyond remains genuinely exciting even today.


The first piece of wild new information that Michelle's research has uncovered is that Houdini filmed his famous scenes on the Niagara rapids on the very same day as the funeral for Annie Edson Taylor. Taylor was famous for being the first person to survive going over the falls in a barrel. Incredibly, she performed the daredevil stunt at age 63!

Was it just a coincidence that Houdini shot his own Niagara "stunts" on the day of Taylor's funeral, or was it a ploy to generate publicity? If it was the latter, it backfired somewhat.

The Niagara Falls Gazette did indeed report on the duel events on May 6, 1921, but it was decidedly critical of the film company and, worse, it did not mention Houdini or the film by name. Under the headline: "Canoes with 'Dummies' Are Sent Over Falls as Body of Mrs. Taylor, Cataracts' Conqueror, Is Buried," the paper observed:

Those who attended the funeral services yesterday spoke of the fact that just a few hours before Mrs. Taylor's funeral, a motion picture company had sent canoes carrying dummies over the American Falls. The canoes and dummies were smashed to fragments on the rocks below but pictures of them were taken as they made the plunge over the brink. These pictures will form the climax of a picture romance of Niagara that will probably make thousands of dollars for its producers, while Mrs. Taylor, the only woman who ever made the Falls trip and survived, was unable to derive a fortune from the feat and was buried through the generosity of friends.


It should be noted that the shots of the canoe going over the falls in The Man From Beyond is dummy free. It had to be for the sake of the plot! However, it's possible the film crew sent their second canoe with the dummies over the Falls as well. This photo below show the dummy canoe on the brink of the falls. While the canoe was tethered, it's possible it was irretrievable at this point and was cut free. Interesting to think that for a time a Houdini dummy lay at the bottom of Niagara Falls.


Houdini's rough PR ride in Niagara had started almost from the time he arrived in the city. The police had forbid him from performing any stunts on the Falls, and on May 4 The Gazette reported this remarkable exchange with Houdini at his hotel:

Houdini is temperamental, like the great artist he is. He was much upset when a reporter called on him at his room in the Prospect Hotel this morning. He made no excuse for his appearance, although his blue trousers has yet been flocked of the dirt they had accumulated during his work on the bank of the rapids above the American Falls earlier in the day while staging film play scenes in which he appeared as the star. His black pompadour hair, surrounding a somewhat pale but classic countenance, stood crinkly aloft and accentuated the temperamental attack which caused him to pace quickly to and fro as he conversed. [...]

"Why so upset?" ventured this interviewer.

"Why shouldn't I be upset?" he questioned back. "Here they have been circulating baseless rumors that hurt me. They say I am here to go over the falls, swim the rapids and dozens of other foolhardy exploits which can be performed only at the risk of one's life. I've been warned that I will be arrested if I attempt to stage any such stunt. Well, I would do if if I wanted to, but I don't want to. I have taken great risks but that was earlier in my stage career. I am long past that. I am accounted now an artist. I am receiving a salary of $200,000 a year for acting in moving pictures dramas and directing their filming. No more do I slip loose from manacles and chains for the delectation of crowded houses. That is the past."


The reporter goes on to say that Houdini "summoned" his wife Bess from the other room -- "a petite and altogether charming woman" -- who stated:

"Why of course he will not risk his life in any exploit here, going over the falls or otherwise. I wouldn't let him."


Of course, Houdini (and Bess) weren't being completely forthcoming here. Two days later Houdini did swim the rapids as part of filming, although it's said he did so with a safety line attached. The production actually stayed a day later than they announced to get these shots, along with the canoe action. Perhaps this subtle betrayal had something to do with the rough treatment The Gazette gave him about shooting these scenes on the day of Annie Taylor's funeral?

It's fascinating to see Houdini so out-of-control of his own public image. But with his massive investment in his own motion picture company and career, one can understand how he'd be "temperamental" when he was still being identified as the Handcuff King. He so wants to be perceived as a highly paid motion picture artist -- a Chaplin in his own right. But Houdini's creative efforts in movies could never match his achievements on stage, and Houdini's experience here in Niagara Falls foreshadowed his coming difficulties. 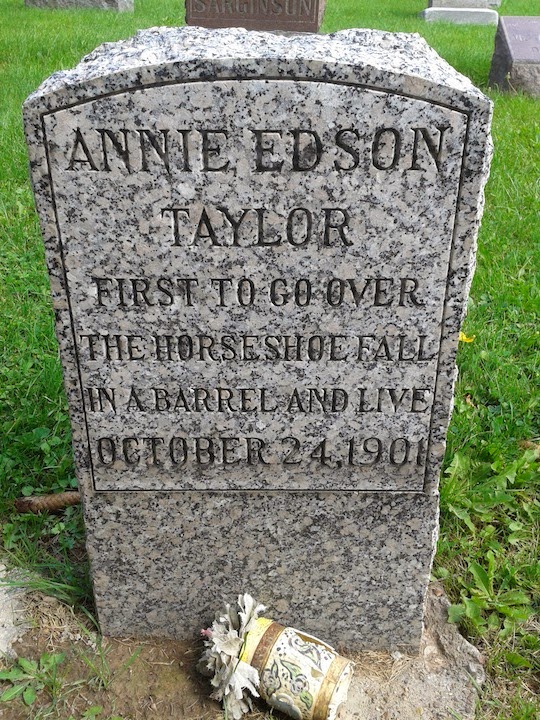 Finally, Michelle pointed out is that Oakwood Cemetery has a special section dedicated to Niagara's daredevils and stunters, including the aforementioned Annie Edson Taylor. While Michelle has yet to uncover evidence that Houdini visited Oakwood's "Stunters Rest", it seems very likely that he did. Houdini could never resist a cemetery, and to have a section devoted to daredevils would have been irresistible for him.

Perhaps if his safety line broke while he was swimming the Niagara rapids, he might have become a resident of "Stunters Rest" himself. But, as always, Houdini escaped.


Thanks to Michelle Ann Kratts for sharing this unknown Houdini/Niagara Falls history. You can purchase her book 'The Missed' on Amazon. And thanks to John C. Hinson for the amazing unpublished images of the stunt canoes.