Hardeen appeared on television in 1945

Reader Bill Carter recently sent in a discovery that I'm excited to share today. On Thursday, January 25, 1945, Hardeen made a television appearance on station WCBW. I don't believe this has ever been mentioned anywhere before. Below is a review from the January 27 issue of The Billboard. 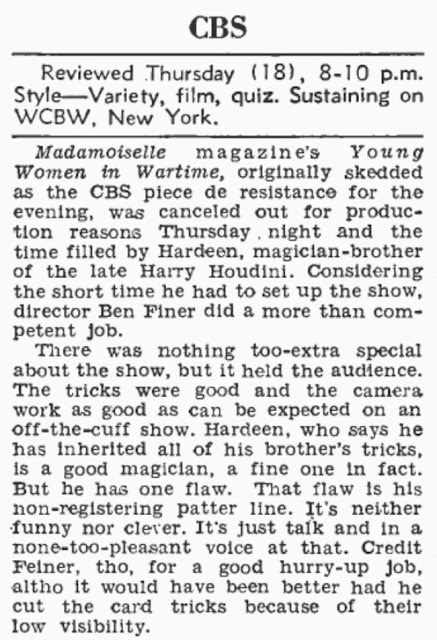 Bill points out that WCBW was a local New York area broadcaster. In early 1945 there was not yet a CBS Television network. WCBW later became WCBS-TV.

This was only five months before Hardeen's death on June 12, 1945. One wonders where this stands as far as a first appearance by a magician on television?

As with Houdini's radio broadcasts, this was probably too early in the history of the medium for us to have any hope that a recording was made. The criticism of Hardeen's speaking voice is interesting. I'm not sure what the reviewer, Marty Schrader, didn't like about it, but you can hear Hardeen's voice for yourself in this 1939 radio broadcast.

Vaudeville, Broadway, radio, film, and now television. Dash did it all!