How Houdini almost went 20,000 Leagues Under the Sea 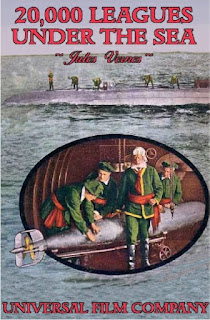 Unmade Houdini movies are a favorite topic here at WILD ABOUT HARRY. But we've mostly discussed abandoned biopics [see: The men who almost played Houdini]. What about the movies Houdini might have made during his own lifetime?

One of the earliest and most intriguing of these near misses occurred in 1915 when Houdini was approached by the still young Universal Film Company to star in an adaptation of Jules Verne's 20,000 Leagues Under The Sea. Presumably, Houdini was being considered for the lead role of Captain Nemo.

This clipping from Variety was uncovered by our friends Dorothy Dietrich and Dick Brookz at the Houdini Museum in Scranton. It suggests why the project never went forward...at least not with Houdini in the lead.

Harry Houdini was approached by the Universal this week to appear in its production of "Twenty Thousand Leagues Under the Sea." When it came to the money talk Houdini took the film men off their feet upon demanding $40,000.

In explaining why he asked the big money Houdini explained his vaudeville prestige would be damaged by appearing on the screen. Houdini offered to be handcuffed and then placed in a coffin and buried underneath the sea by divers, all in full view of the camera.

The offer made Houdini, the film men stated, was the same as Annette Kellerman's salary, which they said was $400 weekly with a small percentage of the profits.

It's interesting to see that at the start of 1915 -- a year in which Houdini embarked on a nationwide Vaudeville tour -- he considered filmmaking a career liability. But by year's end, he was visiting stars and movies studios in California, and would soon plunge into the movie business with his own Film Developing Corporation.

Universal's 20,000 Leagues Under The Sea would be made in 1916 with Allen Holubar as Captain Nemo. For the role, Holubar wore a long white bear and wig. One wonders if Houdini would have gotten the same treatment? The final film was a combination of the book and another one of Verne's adventure novels, Mysterious Island. The film was produced by the "Williamson Brothers Submarine Film Corporation" and much was made of the underwater photography, a real novelty in these early days of cinema. 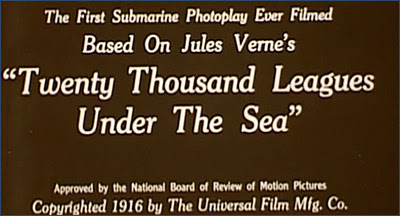 Even though Houdini wouldn't take the plunge in 20,000 Leagues, in 1917 he made a deal with the Williamson Brothers to star in another underwater spectacular tentatively titled "Houdini's Sub-Sea Miracle." This time they met his salary demands, which was said to be "the largest sum of money ever paid to any one performer for a single motion picture." Thriller writer Arthur Somers Roche wrote a script, but for reasons unknown, the project never went before the cameras.

But the idea of Houdini in underwater action proved irresistible, and when it came time to make his second feature for Famous Players-Lasky, Houdini turned to Williamson Brothers technology and featured several underwater scenes in Terror Island. In fact, Terror Island bears a striking resemblance to Universal's 20,000 Leagues in that it features an inventor with an experimental submarine who sets out a rescue an abducted girl from a "mysterious island." 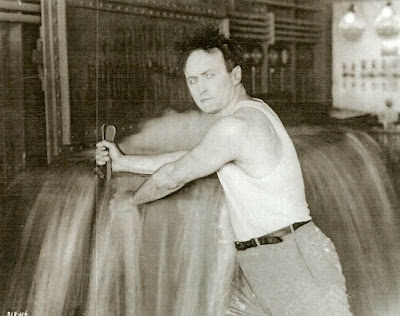 Universal's 1916 version of 20,000 Leagues Under the Sea survives and is available on DVD and via Amazon Instant Video. It's fun to watch and imagine what this film could have been with Houdini in the lead.