100 years ago Houdini vanished an elephant 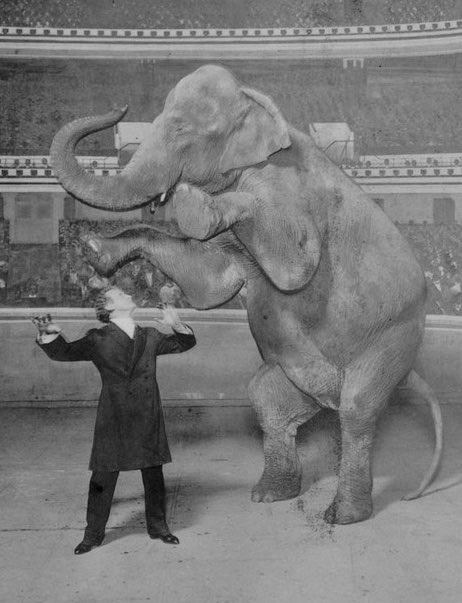 It was 100 years ago today, January 7, 1918, that Houdini first vanished a live elephant at the enormous Hippodrome Theater in New York. To this day, no one knows exactly how Houdini did it. But that hasn't stopped magicians from speculating.

In the effect, an elephant named "Jennie" was ushered into the rear of a large cabinet decorated as a circus wagon. The cabinet was closed and turned toward the audience, a task requiring a block and tackle and 30 men. On Houdini's command, both the front and back of the cabinet were opened so the audience could see through to the back of the stage. The elephant was gone. "No special background, in full glare of the lights, and it is a weird trick," Houdini proudly proclaimed.

The vanishing elephant was an instant hit, and it led to the longest engagement of Houdini's career (19 weeks). But some magicians thought the presentation was lacking. They complained that because of the semi-circular seating inside the huge Hippodrome auditorium, only people directly in front of the cabinet could see that the elephant had actually vanished. Others had to take Houdini's word for it. But while magicians might have criticized the effect, they could still not explain how Houdini did it. 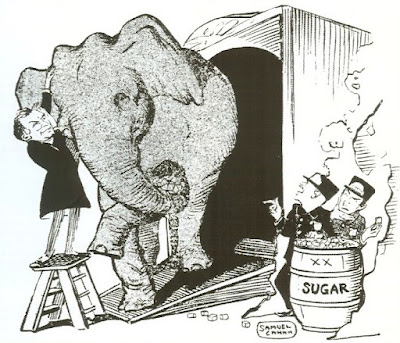 Houdini's elephant was part of the "Powers Performing Elephants" troop, a regular feature of the Hippodrome show. Houdini claimed she was the daughter of Barnum's famous Jumbo and that she was "gentle as a kitten." He also pointed out, "I never allowed a hook to be used, relying on block sugar to make her go through her stunt, and she certainly is very fond of me." Some descriptions say Jennie wore a large blue ribbon around her neck and a giant wristwatch on her leg (so the audience could see her until the last second). Interestingly, Jennie would outlive Houdini by many years. An article from May 25, 1950 shows her alive and well at age 86.

Of course, with a trick the garnered as much attention as the vanishing elephant, competitors rushed to create their own versions. Always one to aggressively protect his effects, Houdini took out ads in the trades warning competitors of his copyright. This appears to have worked as no other vanishing elephants appeared during Houdini's lifetime (that I'm aware).

Houdini revived the elephant vanish in 1922 at the Times Square Theater in New York to perform after screenings of his film The Man From Beyond. Some say the trick was more effective in the smaller venue, in which Houdini alternated between two smaller elephants borrowed from the Ringling Circus. As little as we know of the Hippodrome vanish, we know even less about the Times Square version, which may or may not have employed the same method.

How did he do it?

No one knows exactly how Houdini vanished his elephant. But that hasn't stopped the publication of explanations. J.C. Cannell (The Secrets of Houdini) wrote that the elephant passed into a second hidden cabinet. Walter B. Gibson and Morris N. Young (Houdini's Fabulous Magic) described a method that employed the use of black art. Modern Mechanic claimed the elephant was hidden behind a false backdrop. Even the infamous "Masked Magician" revealed a method involving mirrors, but his presentation bore no resemblance to how Houdini presented his effect. Interestingly, Houdini must have revealed the secret one night when he invited a committee of engineers, in town for a convention, to enter the cabinet. He then vanished them to the delight of their fellow employees.

The theory that holds the most water was first put forth by Guy Jarrett, who had pitched his own vanishing elephant idea to the Hippodrome management and was turned down. Jarrett's explanation was based on the Disappearing Donkey, an effect Houdini had purchased from Charles Morritt in 1914. While Jarrett's theory was dismissed by many as unworkable at this scale, it was championed by Jim Steinmeyer, who demonstrated the feasibility of it at the 1983 Magic Collectors Convention in Chicago using a toy elephant and a scale replica of the cabinet. Steinmeyer later published his theory in his book Hiding The Elephant (2003). As for its flawed presentation, Steinmeyer wrote, "It might have been a great illusion disguised as a bad illusion." 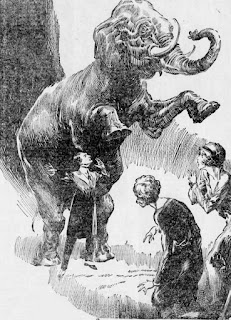 The great Patrick Culliton, who published his own Notes on the Vanishing Elephant, believes that the Jarrett/Steinmeyer theory is most likely the correct one. In fact, Patrick thinks Jarett, who never actually saw the illusion himself, might have been tipped to the method by Clyde Powers, the stage manager of Cheer Up!, who owned a magic shop where Jarrett worked.

However, the Jarrett/Steinmeyer theory relies on eyewitness accounts of how the trick was presented, specifically that the audience looked through a round opening in the front of the cabinet. But in a 1992 issue of the Mystifier, William M. Doerflinger, who saw the trick as a youth, specifically refutes this, saying:


Frustratingly, there are no surviving photos of the cabinet or any of the apparatus Houdini used during his vanishing elephant to help settle the matter of exactly how it appeared to the audience. There's not even a known poster. So in more ways than one, the vanishing elephant remains one of Houdini's great mysteries. As Houdini himself said, "Even the elephant doesn't know how it's done." 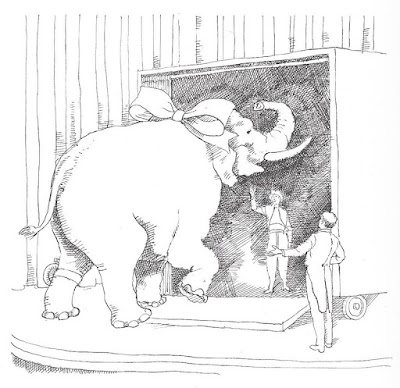 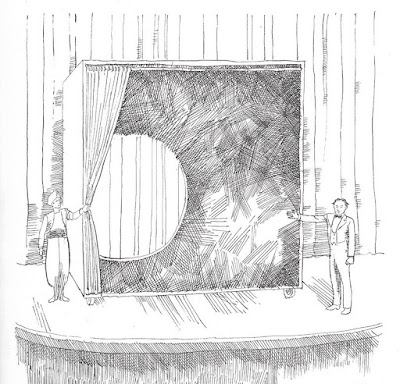 The above illustration is from Escape King: The Story of Houdini (1975) by John Ernst.

UPDATE: David Haversat of David Haversat Magic has shared with me the unpublished notes of Milbourne Christopher explaining how he vanished his own elephant. Christopher writes that he believes his method is the same that Houdini used. As a rule, I don't expose secrets on this blog, so even though David has given me permission to share the notes, I'm reluctant to do so. But I will say I think Christopher's method makes sense, and it allows for the front of the cabinet to be fully opened as some eyewitness say that it was. I'm now thinking Milbourne Christopher may be the one who finally got it right.