Guest blog: William V. Rauscher on Houdini and the Hippodrome 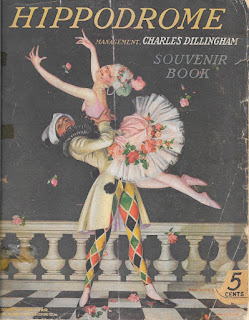 Houdini played many theaters during his illustrious career but none like the one he appeared in for 19 weeks beginning January 7, 1918, when he vanished Jennie the elephant on the stage of the colossal Hippodrome Theater in New York City.

In the history of conjuring great magicians have played many theaters throughout the world but the Hippodrome in size, technology, and sheer magnificence was beyond belief. People today are awed in Las Vegas when they see the Titanic sink on stage or watch the Christmas show at Radio City Music Hall.

At the Hippodrome they saw spectacle after spectacle that dwarfed today's theaters. If you're lucky enough to come upon a Hippodrome Theater program, it makes you wonder, "What was the Hippodrome like when Houdini performed there?" Few remember this enormous theater and even fewer realize its grandeur and elegance. It was advertised as the “Center of the Universe.” Leave it to Houdini to perform in the “center of the universe” and above all things to vanish an elephant. His appearance there made an impact at the time and it is still being discussed today. In size and effect alone the Hippodrome was probably the only theater that could accommodate such an illusion.

Two men deserve utmost recognition for creating and building the Hippodrome. They were the entertainment entrepreneurs Elmer "Skip" Dundy and Frederick Thompson. Described as "theatrical dynamite," they specialized in grand displays, lavish buildings and architecture and were entertainment giants. They thought and built big attractions such as Luna Park at Coney Island which opened in 1903. When they designed the Hippodrome Theater they thought beyond big – they thought gigantic. 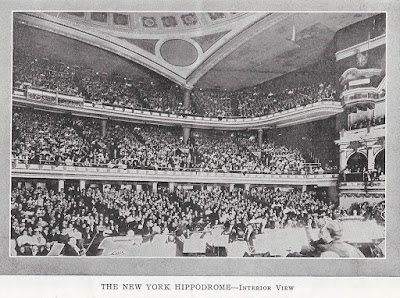 Construction started in July 1904, and the architect was J. H. Morgan who created the building in the Beaux-Arts style with Moorish Revival themes. Dundy and Thompson wanted a theatre that would be the greatest in the world and they succeeded. It was to be the equivalent of a great theatrical temple and so it was.

The location was on Sixth Avenue between 43rd and 44th Streets. Exotic beyond belief, the planned seating capacity was 5,200. When finished, it had state of the art technology including hundreds of ingenious stage mechanisms. The electrical system was staggering and lit the theater with 52,000 light bulbs. There were 5,000 in the ceiling alone and another 9,000 lit the stage. A platform 30 feet high was required to work the light board. 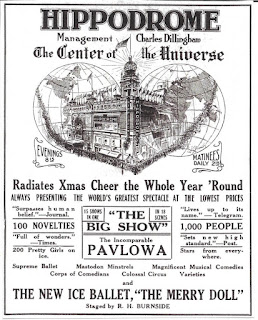 The stage was 110 feet deep and 200 feet wide and each performance required 196 stage hands. The stage was equipped with hydraulics, counterweights, and traps that could be raised, moved or lowered. In the front of the stage beneath the covered floor was a glass tank 14 feet high and 60 feet in diameter. It held 8,000 gallons of water, could be flooded at a rate of 4,000 gallons a minute for water spectacles, and had the ability to be raised or lowered at will by a system of hydraulic pistons. It was so constructed that a bevy of chorus girls could descend the steps and into the water and never be seen again. A special air pocket allowed them to walk under the water and into the wings.

The main auditorium was designed in Roman style with red, gold, silver and ivory and the carpet offered the same colors. There were wall hangings, draperies and upholstery in red velvet with gold and silver embroidery and tassels. Carved stone and marble dignified the lobbies.

The opening night Hippodrome performance on April 12, 1905, and featured “A Yankee Circus on Mars” with a cast of 1,200 actors and dancers in beautiful costumes. Scenery for the Hippodrome was also grandiose and filled the stage. Overhead cranes shifted scenery that weighed up to ten tons. There were areas underneath the stage similar to a zoo for elephants, horses and other animals. It was twice the size of the Metropolitan Opera house and the orchestra pit accommodated hundreds of musicians. The great theater organ was created by the Wurlitzer Co. 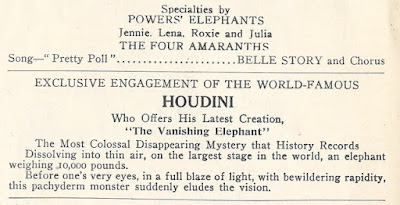 As time went on financial problems escalated and the Hippodrome could no longer support the extravaganzas and spectacles it once presented. Many factors contributed to its demise. The coming of talking pictures, the decline of Vaudeville, the failings of Keith-Albee and Schubert management and troubles encountered by Dundy and Thompson. Producer Billy Rose was the last to try and bring back the heyday of the Hippodrome. He leased the theatre and presented its final spectacular production “Jumbo,” staring Jimmy Durante. The show played five months until the Great Depression brought it to an end. The Hippodrome closed August 16, 1932, and was demolished seven years later.

One great theatre capable of staging spectaculars still remains in New York. It opened on December 27, 1932, with a seating capacity of 5,933. It features an Art Deco interior with a sunburst ceiling and it is still capable of presenting grand productions. Known as "The showplace of the nation," theatergoers know it as the famous Radio City Music Hall. We can be sure that if Houdini were alive today he might be presenting the vanishing elephant there but probably with the help of the many hydraulic lifts that raise and lower the stage sections that might make the illusion even greater than it was in his day.

Just as Houdini stood on the stage of the Hippodrome and fired a pistol to make Jennie the elephant disappear, so to did the Hippodrome disappear to the sounds of demolition. When you think of Houdini and his elephant Jennie you might also fondly recall of the mighty Hippodrome. They are both wonders now gone and only memories. 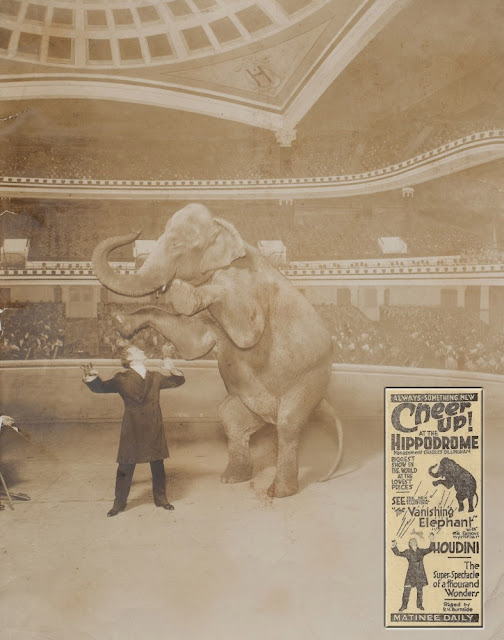 Thanks to William Rauscher and Tom Ewing for allowing me to share this here at WILD ABOUT HARRY. If you have your own piece of Houdini research that you'd like to share as a "guest blog," please get in touch via my Contact Page.