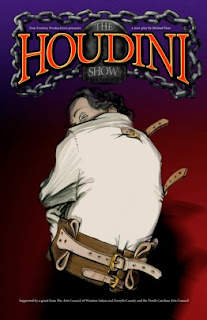 PRESS RELEASE: In November, 1924, the world famous Harry Houdini performed at Reynolds Auditorium. On May 31, 2007 Houdini returns to Winston-Salem.

Tom Foolery Productions presents The Houdini Show a new play by Michael Huie. Performances will be May 31, June 1 and June 2 at 8 p.m. and June 3 at 2 p.m in the McChesney Scott Dunn Auditorium at SECCA at 750 Marguerite Drive in Winston-Salem, N.C. Tickets are $10 for adults and $7.50 for seniors and students, and are available at the door. Reservations are not being accepted.

Houdini died on Halloween in 1926. His secrets were closely guarded after his death, but his greatest secret was how he became Houdini. In a show that combines magic, escape and theatre, The Houdini Show reveals how a man born into poverty in a family of immigrants became one of the most famous men in the world.

The Houdini Show is supported in part by a grant from the Arts Council of Winston-Salem and Forsyth County and the North Carolina Arts Council.
Written by John Cox at 10:25 AM