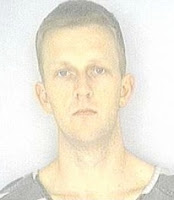 The Cincinnati Enquirer reports that Jarrod Frederick allegedly made a priceless collection of Houdini memorabilia vanish. But the trick had nothing to do with magic. Prosecutors say it was arson.

Frederick is accused of burning down an Indian Hill home, causing $1 million damage and $350,000 in damage to property inside, including owner Dr. Randall Wolf's collection of Houdini memorabilia, said Stephen Ashbrock, chief of the Madeira and Indian Hill Joint Fire District.

"There was no past contact" between Wolf and Frederick, said Indian Hill Rangers Detective Carl Watts. "He just thought it was a good house to burglarize."

Frederick's lawyer, Greg Cohen, said, "This was a total random of act of drug-induced delusion resulting, unfortunately, in the destruction of somebody's home."

Frederick, who once did lawn maintenance for Indian Hill homeowners and knew the area, dropped his wife off at Kenwood Towne Centre on Dec. 30 and headed into Indian Hill looking for an out-of-the-way place to smoke crack cocaine, Krumpelbeck said.

He found it at Wolf's $1 million, six-bedroom home on Park Road and broke in, court records say. When Frederick had trouble lighting his crack pipe, he lit a box of paperwork, hoping that would help, Krumpelbeck said. The flames quickly got out of control, reports say.

Frederick, who had parked in the garage, fled so quickly he drove through the garage door, trailing parts of it, Watts said. Police spotted Frederick driving erratically in a park.