Maybe it has something to do with the new Houdini Seance at the Magic Castle (which I recently had the pleasure of re-experiencing with my fellow "Houdini Nuts"), but Margery seems to be angling for my attention lately. Here's a tidbit that recently found it way to me that I don't believe has appeared in any biography, yet it pinpoints an important moment in Houdini-Margery history.
Houdini's first public exposure of Margery, which included officially outing her identity as Mina Crandon, wife of the eminent Boston surgeon, Dr. Le Roi Crandon, took place on the evening of October 16, 1924, at Sherman Hall on the campus of Austin College in Sherman, Texas. Houdini had teased the coming news during his lecture in Waco a few days earlier.
The famous Margery seances had taken place in August, but Houdini was bound by the Scientific American's embargo on all details of the Margery investigation. That embargo lifted at 8:00 AM on October 16 while Houdini was in the middle of his nationwide spiritualism lecture tour. Houdini wasted no time working a full Margery exposé into his lecture that very night. Three days later, on October 19, he released his famous pink pamphlet, Houdini Exposes the Tricks of the Boston Medium "Margery".
Sherman was not one of the larger cities on Houdini's tour, and until recently the only record I had of this lecture was the below newspaper clipping that sold on eBay a while back. I don't know who won this, but happy to let them know of its added historical significance! 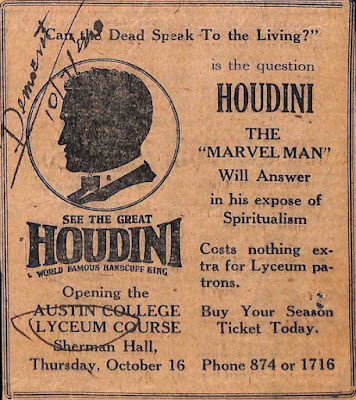 Thanks to "Houdini Nut" Joe Notaro for providing me with a copy of Ron Cartlidge's "Houdini Final Texas Tour" lecture notes.
UPDATE: Just want to add that while Houdini officially named "Margery" as Mina Crandon at this lecture, her identity had leaked in the press in early August.