Secrets of the new Houdini Seance by Jim Steinmeyer 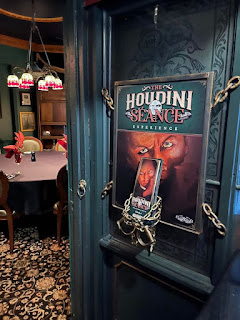 Today we have a very special GUEST BLOG and a real treat. The great Jim Steinmeyer provides us with an exclusive insider's look at the new Houdini Seance Experience at the Magic Castle, the world-famous clubhouse of the Academy of Magical Arts in Hollywood. The show was written and produced by Jim Steinmeyer with new effects created by Jim and designed and built by John Gaughan and Mike Elizalde of Spectral Motion. The show was directed by Benjamin Schrader. The room was art directed and scenic painted by Jim Piper.
Enjoy this behind-the-scenes look at the new Houdini Seance. Your chair is waiting...

SECRETS OF THE SEANCE
by Jim Steinmeyer
The challenge of the show, of course, was “how” we bring Houdini back, if we successfully reach his spirit, and what, if anything, he has to say. The problem, of course, is that if we fail to reach Houdini’s spirit, the theatrical point of the seance is foiled. And if we manage to get a message from Houdini, we’ve sort of messed up anything that Houdini represented during his lifetime. And… of course, the Magic Castle might be expected to show a little respect for Houdini’s firmly-held beliefs.
I can’t ruin the surprise, of course, but it’s fair to say that Houdini doesn’t come back from the dead, and Houdini ends up having quite a bit to say to us directly and offers us a gift. At one point, we actually hear Houdini explain that “anyone can be fooled in a dark room,” which turns the entire seance experience upside down and makes us question anything we’ve seen. I actually think that his message about eternity shows an understanding that only someone like Houdini would have been able to express. His insight is more enlightened than the usual ghostly messages or whispers in the dark.
The new seance room is a mix of design and function, history and “new legends” in order to set up their show. For those that are interested in the real history, here are few secrets of the new seance experience. 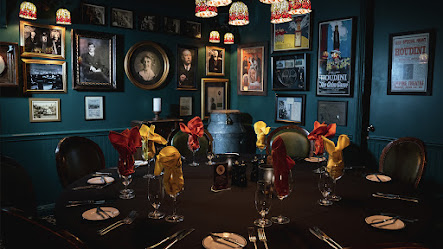 THE NEW SEANCE ROOM
The room was completely rebuilt, right down to the studs, with new electrical wiring, improved air ducting for the air conditioning, and better soundproofing. We concealed a lot of this by designing the room with its own history. For example, the new fireplace is a small, elegant Victorian bedroom fireplace, now bricked up. The wainscoting around the room has been painted over. Although these are new elements, they suggests layers of changes and generations of use. We picked out a rich Victorian teal blue for the walls. It’s actually very close to an original color of the room, from about a dozen years ago, which was dark green.
Disney art director, scenic artist and longtime Castle member Jim Piper added warm wood grained moulding around the ceiling. You’ll find that the theme of the woodwork and stained glass lighting fixtures is “roses.” There’s definitely a reason for that. We get a beautiful misty glow to the room when the rose colors play on the images and the walls. It feels haunted. Our lamps are all Edison bulbs, which flicker and flash at special moments of the seance.
THE PICTURES ON THE WALLS 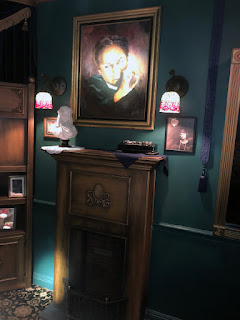 We’ve added a number of interesting Houdini graphics to the walls, including authentic posters from his career, as well as a recent collectable reprint of the poster from his Grand Magic Revue. If you get a chance to look at the images, you may note some interesting nods to the Vanishing Elephant (including an antique Elephant lamp), images of Arthur Conan Doyle, Margery, her spirit guide Walter, and beautiful images of the Final Houdini Seance of 1936. Those 1936 images were kindly provided by Mark Willoughby. One of my favorite images in the room shows the assembled group on the Knickerbocker Hotel rooftop. The camera is pointed towards the Magic Castle (then, of course, the Lane Mansion). The Castle must be in the shot, although, at nighttime, it’s not illuminated. It’s a wonderful combination of “now” and “then."
There’s also a small picture above the fireplace of an actual spirit medium, circa 1920, in Chicago. That medium is tied to my family history, a friend of my grandparents, and the picture provided a lot of inspiration for me. Let’s just say that, if elements of the seance feel weirdly authentic, it’s because of that particular medium and what he actually did during his Chicago seances. Does that sound mysterious enough?
THE HOUDINI ROSES
We’ve added a sweet new Houdini myth, about the dried roses that Mrs. Houdini kept in her house in Los Angeles. The mediums will tell you the story when you experience the seance. Those Houdini Roses gave me a chance to introduce a brand new effect to the room, a sort of spirit photograph experience for the audience. John Gaughan built the effect for our seance room. 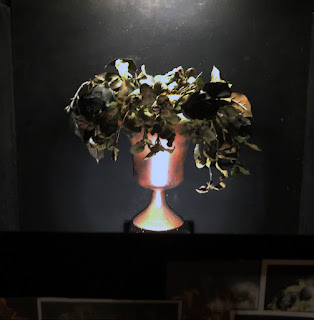 THE GHOSTS
I don’t want to spoil the seance for those that are about to see it, but don’t be surprised if you now see a few ghosts. Mike Elizalde’s company, Spectral Motion, expertly sculpted the special ghosts for us. They’re ghosts of recognizable people, so the project provided a particular challenge to achieve the perfect mixture of reality and fantasy. Let’s just say that you’ll meet some friends, and some enemies, in the seance room.
THE WATER TORTURE CELL
Another newly designed effect is one that strangely, supernaturally, tells the story of Houdini’s famous escape, and gives an account of the accidents that plagued the great magician at the end of his life. The demonstration uses a beautiful little model of Houdini’s Water Torture Cell. The apparatus for this was created by John Gaughan and Freddie Wong.
SOME CLASSIC EFFECTS
We had a chance to reprogram the moments of the famous floating table, so now, when the Spirits take control, the table seems to vibrate and shudder before soaring into the air. Similarly, the famous tambourine still opens its case and rattles in the dark, and the Milk Can (the Irby Milk Can which was seen in the 1952 movie) rattles in the dark room. 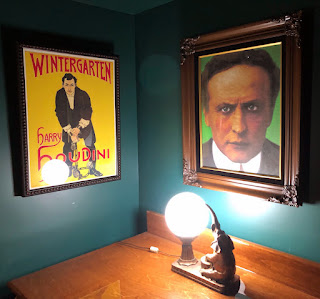 OUR MUSIC AND SOUNDS
Fans of Houdini will get a chance to hear the 1936 Final Houdini Seance, played over Los Angeles radio and played through an antique radio set. They’ll hear Bess sing the actual Paul Dresser song, “Rosabelle,” that inspired the Houdini’s code; they’ll hear Houdini’s patter for The Water Torture Cell, recorded on a wax cylinder; they’ll hear from Arthur Conan Doyle, and his concern for Houdini. They’ll hear a snippet of “Souvenir,” Walter’s favorite song, a bit of “Pomp and Circumstance,” and a weird waltz—that the band played on the Titanic—that appears on the gramophone to welcome Walter into the room.
OUR CAST OF VOICES
One of the big secrets of our seance is that we’ve re-recorded every voice. Yes, every single voice! It was the only way to get the particular performances we needed. It means that, when the seance audience hears Houdini’s Water Torture Cell introduction, we are actually setting up the sound of his voice, so that we can control it. We can bring it back, with our own message, and the audience recognizes Houdini. We play tricks with that through the seance. It’s a very sneaky deception, especially because, to many people, the voice on the cylinder and the Final Houdini Seance recording will sound authentic. Here’s the celebrity cast that secretly took part in our production:
And the person who plays Houdini… Well, I’m going to keep that a secret.
PUTTING TOGETHER ALL THE PIECES
Then we were able to add the considerable talents of our Magic Castle mediums, special lighting effects, sound effects, and a few tales of Houdini’s spectacular career and his mysterious adventures in the seance room, and you have the new Houdini Seance!
In January, the Magic Castle will begin booking the New Seance, with Rob Zabrecky in the medium’s chair. 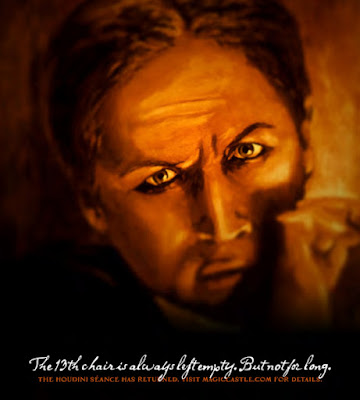 You can get full details and pricing for The Houdini Séance Experience at the Academy of Magical Arts website.
Thank you Jim!
Related:
Written by John Cox at 12:00 PM