Silverman on Blaine and Houdini

Meanwhile: When New York was magical
by Kenneth Silverman The New York Times
Monday, May 15, 2006 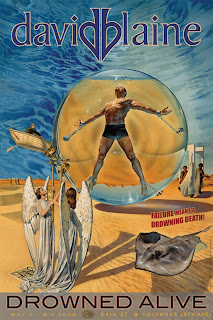 NEW YORK The magician David Blaine spent nearly 180 hours last week submerged in a water-filled acrylic capsule. Staged in the plaza of New York's Lincoln Center, his endurance test provoked much criticism and ridicule in the press. But such cultural hauteur is misguided: Magic, escapes and related feats have a long history of public performance in New York, whose residents once realized that they added something important to the city's creative mix.

Public miracles in New York were conjured most famously by Harry Houdini himself. In July 1912 he was manacled and locked in a wooden packing box. Nailed shut, roped, loaded with sash weights to make it sink, the box was dumped in the East River near Governors Island. With a small splash, Houdini bobbed up from the water about a minute later. Tugboats tooted, ferryboat passengers applauded, The New York Times ran appreciative headlines.

Blaine's critics attack not so much what he did as where he did it - his supposed desecration of highbrow Lincoln Center. Yet Houdini regarded himself as part of the legitimate theater. He opened his 1925 full-evening show at the Shubert Theater, while steps away Eva Le Gallienne was starring in Ibsen's "Master Builder." The same crowd could have been expected to see both.

And however devoted to Better Things, Lincoln Center also houses the city's Library of Performing Arts (where several David Blaine videos are available for loan) and adjoins the grounds of the Big Apple Circus.

At the end of his feat Blaine removed his breathing apparatus and held his breath underwater for an astonishing 7 minutes and 8 seconds - yet the press has criticized him for failing to break the world record. Well, his knockout climax would surely have pleased Houdini. In his brownstone on West 113th Street, he often immersed himself in a sunken tub for ever colder and longer periods. He succeeded in staying under warm water for two and a half minutes, under ice water for 38 seconds.

Houdini's strenuous breathing exercises made possible his mindbender of August 1926. Soldered into a galvanized iron coffin, he was lowered into the swimming pool of the Hotel Shelton at 49th Street and Lexington Avenue. The crowd at poolside included a physiologist from the Bureau of Mines, who hoped to learn something that might help miners trapped in collapsed shafts. Keeping still and breathing shallowly, Houdini stayed underwater in the sealed coffin for 1 hour 31 minutes.

David Blaine is no Houdini - nor is anyone else. At Lincoln Center his problem was to stay in; for Houdini the problem was almost always to get out, from every imaginable confinement: jail cells, the world's largest envelope, a giant football, the belly of a "sea-beast" that had supposedly washed up on shore near Boston.

Yet Blaine has brought into the present something that was essential to Houdini's success: a democratic style of performance. When on stage, Houdini spoke conversationally to his audience, sleeves sometime rolled up, one leg planted in front of the footlights as if ready, he said, "to spring among the people."

Blaine started as a street magician, levitating himself or doing card tricks for a sidewalk audience. When members of the audience at Lincoln Center touched his transparent bubble, he would sometimes place his own hand on the other side, striving for a connection. If nothing else, his feat of endurance brought a diverse crowd of thousands of New Yorkers together, renewing for a while the city's waning spirit of democratic community.

Original article in The New York Times
Written by John Cox at 8:10 AM