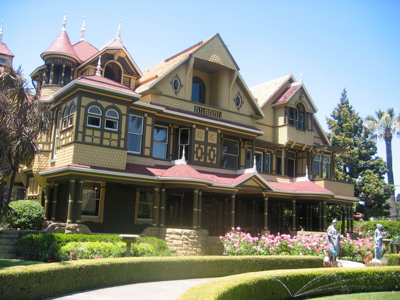 This week while traveling through San Jose I stopped at the fascinating Winchester Mystery House. This bizarre Victorian mansion was built by the widow of the Winchester rifle fortune who was told by the spirits that if she kept adding to her house she wouldn’t die. The result is a sprawling 160 room maze-like mansion with doorways to nowhere and stairways into ceilings. Wild stuff.

But the real surprise was the discovery of a Houdini connection!

In the house’s Winchester rifle museum, there is an old yellowed newspaper article about how Houdini himself visited the mansion and cited it as an example of how spiritualism makes a person insane. Pretty good example.


UPDATE: It appears Houdini (and Bess) visited the house in October of 1924 during his nationwide Spiritualism lecture tour that year. Click HERE for more.