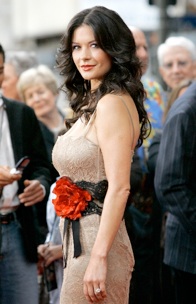 The Hollywood Reporter is reporting that Catherine Zeta-Jones is in negotiations to star in the Harry Houdini indie biopic Death Defying Acts opposite Guy Pearce.

Described as a lavish period film, Acts centers on Houdini during the height of his career in 1926, when he toured the world, amassing large crowds with his elaborate and daring escape performances. Zeta-Jones is set to play an exotic psychic with whom Houdini embarks on a passionate affair.

Helmed by Gillian Armstrong (Little Women, Oscar and Lucinda), the picture is scheduled to start filming in the U.K. later this summer. Tony Grisoni and Brian Ward penned the screenplay.

Zeta-Jones won an Oscar for her supporting turn in the musical Chicago. She is shooting the untitled Scott Hicks film.

It was perviously reported that Rachel Weisz was attached to star in “Acts.”

UPDATE: Starpluse News Blog is reporting that Zeta-Jones has saved Death Defying Acts from being scrapped by agreeing to take a pay cut to star in it. The star, who can command fees of up to $12.5 million, agreed to a lower salary after it was revealed the project was struggling.

Death Defying Acts will be the first British film Zeta-Jones has appeared in since she became a Hollywood star.

Zephyr Films producer Chris Curling says, "It’s a great script and a very strong female part. I imagine she feels it's a challenging role - and she's from Britain so that's probably part of the attraction."
Written by John Cox at 5:21 PM