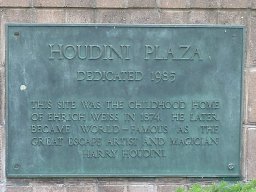 Plans to redesign Houdini Plaza in Appleton Wisconsin have been approved, reports the Appleton-Crescent.

The open space in the center of downtown Appleton, which celebrates local boy Harry Houdini, is used for events such as Octoberfest, a weekly summer concert series, and as an overflow area for the farmer's market. However, on a daily basis, it doesn't get used much.

The Appleton Parks and Recreation Department plan hopes to change that.

The Metamorphosis tribute statue, largely hidden from view, will be moved closer to College Avenue, next to the Appleton Art Center and will become a much more visible centerpiece of the plaza. It will include Houdini history information.

A stage with a canopy will be built near the front of the Appleton Center, with plenty of room for a concert audience in front of it.

Most of the grass will be replaced by a hard surface, which would better suit the current uses of the plaza. A trash disposal area for the adjacent business will move to the east end of the plaza, on Oneida Street, to better hide it from view and to allow for easier pickup.

The redesign is expected to take two or three years and is estimated to cost $1.3 million if outside contractors do all the work. But city officials are confident that city staffers can do some of the work — and they say they'll work with ADI and other involved parties to try to raise money through grants and donations to defray the costs.
Written by John Cox at 5:20 PM