The mystery of the two Torture Cells

The following article first appeared in the Las Vegas Weekly on December 11, 2003. I find this story fascinating, and I have my own contribution to the mystery, which you’ll find at the end of the article. 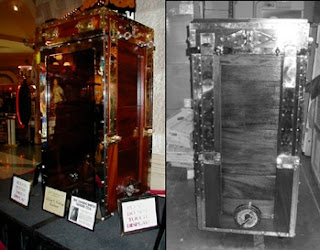 If his wish had been honored, if his illusions had all gone to the grave with him and his brother, one of Houdini's most famous tricks wouldn't be boxed up in a Las Vegas warehouse right now, in need of an escape artist. But there it sits, the original Chinese Water Torture Cell. Then again, how original is it? That's the question shackled to the cell by a chain of broken agreements, alleged devious tricks and legal actions. Because, thanks to a craftsman hired to restore this device, there may be a working replica.

"Houdini would be throwing up," says Geno Munari, the disgusted president of Houdini's Magic Shops, the Houdini's Museum at the Venetian and the warehouse in which the crates sit. He'd planned to display it in the Houdini museum at the Venetian, but has chosen to keep it boxed and hidden. The rumored replica is said to be indiscernible from the original, shedding doubt as to the authenticity of both.

The Chinese Water Torture Cell dates back to 1911. It's a water-tight rectangular piece made of glass, mahogany and steel, a little more than 2 feet wide and just under 5 feet tall, valued at $1.5 million. Houdini would be lowered into the cramped, water-filled cell headfirst, feet shackled to its lid. Through the glass, viewers could watch the struggle on the face of the great escape artist and see there was no discernable way air could get in—but somehow, it did. Houdini even offered $10,000 to anyone who could tell him how he was breathing. He never had to pay.

In his lifetime, Houdini and his brother, Theodore Hardeen, were the only two who held the key to the mystery, and when Houdini died, he willed the cell to Hardeen, with the understanding that brother and cell would expire simultaneously. That didn't happen. Hardeen gave and sold many of his brother's tricks to friend and fellow escape artist Sidney Radner, who kept mum about how the tricks work. For decades, the Water Torture Cell was on display in the Canadian Houdini Magical Hall of Fame, until the place burned in 1995 and the cell was partially destroyed. Radner, who lives in Massachusetts and owns the world's largest collection of Houdini memorabilia, sent it to John Gaughan, a Houdini collector/repair man in California who had restored the cell in the early nineties.

The restoration seemed successful, and the cell was shipped to Munari, who'd rented it from Radner and was prepared to put the device on display. Then came the replica rumors. Munari first heard them at the 2002 Halloween Houdini séance in Seattle (every year, mediums and fans try to contact the escape artist, who died on Halloween). Respected magicians were saying they'd seen the replica and the original side-by-side and couldn't tell the difference. Munari took that information to Radner, who was aghast.

"He was hired to restore the original," says Radner's attorney, Michael McCue, from his Las Vegas office. "The implied terms were not to build a replica that would injure the value of the original or create doubt as to the authenticity of the original."

Radner, an honorary curator of the Houdini museum and founder of the Houdini Historical Society, sent four letters to Gaughan, asking to see the replica, and received no response. So he's suing Gaughan for fraud, breach of contract and misappropriation of trade secrets, among other things. He's demanded that Gaughan either return or destroy the replica, leaving the original as the only one in the world. Attempts to reach Gaughan were unsuccessful, and his lawyer would not comment, other than to deny the allegations and say they've filed a motion to dismiss, claiming a Las Vegas court doesn't have jurisdiction because Gaughan is a California resident.

For now, the water-torture cell will continue gathering dust. Munari says he'll eventually put it on display, when they open a new museum next to the Liberace museum in coming months. But as long as the replica exists, doubts will remain.

"Which one's the real one?" Munari demands. "How do I know all the pieces are in there, or if he's got some of the pieces in the other one? It's just an improper thing to do."

Then again, if Houdini's will had been obeyed and the cell was destroyed upon his brother's death, none of this would be an issue. Mediums, psychics and Ouija board operators take note. Perhaps that's a topic for next year's séance.


So here’s my own contribution to this mystery. When I visited the Houdini Museum in Appleton Wisconsin -- which housed the Sidney Radner Houdini collection -- in September 1998, I was told in casual conversation with the curator (whom I was friendly with) that there was a full scale replica of the Water Torture Cell in their archive. The idea had been to display the cell, but when they were moving it, the handles broke off so it was waiting repair. It never was displayed, and I never again heard anything about a replica Water Torture Cell until this 2003 article.

So was this replica in the Houdini museum archive the disputed replica which the article refers to above?

If so, this puts the creation of the replica cell at least 5 years before it’s discovery in Las Vegas, and squarely during the period of time in which the original cell was believed to have been completely destroyed in the Niagara Falls museum fire (it was later revealed only the wood burned). It would also be highly unlikely that Sidney Radner would be unaware of its existence. In fact, he was in Appleton at the same time I was.

UPDATE: A fellow Houdini enthusiast writes in tell us that he witnessed a replica cell being presented as a gift to Sidney Radner by John Gaughan during the Magic Collectors Weekend held in Appleton in May 1992. The presentation was public and witnessed by most of the major magic collectors of the day.

Seems likely this was the same replica I learned about in ’98. Presumably, it was tucked away in the museum archive after the ’92 weekend where it sat until 2003 when Sidney Radner yanked his collection and shipped it off to Las Vegas. Clearly, Sidney knew about a John Gaughan replica, so why the expression of shock at its discovery (and if it’s not the same replica, just how many replicas are there)?

Also, where is this replica today?

UPDATE 2: In the Summer of 2011, the John Gaughan Water Torture Cell replica was put on temporary display at the Skirball Culture Center in Los Angeles as part of the traveling Houdini Art and Magic exhibition. John and Sid both attended the opening celebrations, so it appears their differences re the replica have been resolved.
Written by John Cox at 7:35 AM