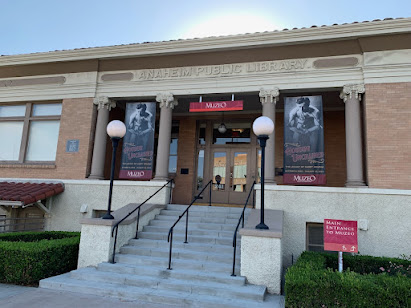 On Saturday I had the pleasure of attending the opening of Houdini Unchained: The Legacy of Harry Houdini at MUZEO Museum and Cultural Center in Anaheim, California. The exhibition showcases the never-before-displayed collection of Dr. Randall Bell. I was very excited to see this and I'm happy to report it surpassed my expectations. There are some true rarities on view and the entire exhibition is beautifully presented. Houdini never performed in Anaheim, but he's here now!
One of the first things you see on entering the first gallery--which tells the story of Houdini's origins and his magic--is Houdini's original Flower Cone Illusion. It's exciting to see any surviving piece of Houdini apparatus, and to see something this large from the final season of his 3 Shows in One is truly special. In this effect an assistant, possibly Bess, would be turned into a large bouquet of flowers. The bouquet is still inside the cone today. 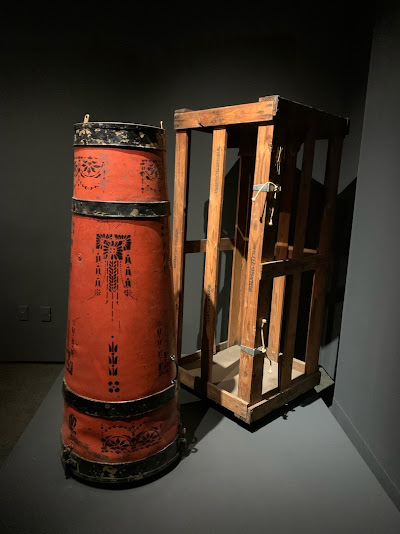 The Flower Cone was used by Houdini and later Hardeen. The traveling crate also shows the name of (Milbourne) Christopher. The burnt orange color matches other illusions known to be from the 3 Shows in One, such as Slicing a Woman in Eight and Houdini's Blooming Rosebush, which is on display as well! This is one of two tables Houdini used in his show. The Flower Cone and Blooming Rosebush were both made by R.S. Schlosser of New York. 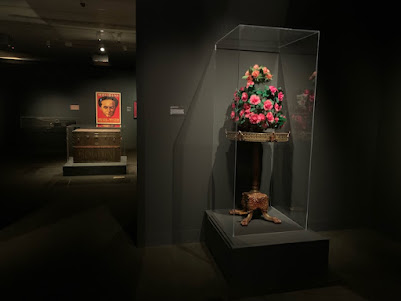 You may recall the last place we saw this flower table was in the workshop museum of master illusion builder John Gaughan. As it turns out, Dr. Bell has purchased many of John's Houdini artifacts which is big news in itself! The original traveling case for the table, bearing Houdini's name, is also on display.
The next gallery showcases escapes, and here we find a Metamorphosis trunk, a vintage-style straitjacket used in the movie The Linguini Incident, and the Water Torture Cell first made by John Gaughan for the movie The Escape Artist. This cell has appeared in many different film and television productions, including Young Harry Houdini. While much larger than Houdini's cell, it's a great representation of his most famous escape and now looks right at home in a museum. 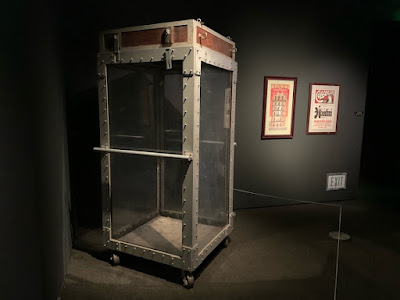 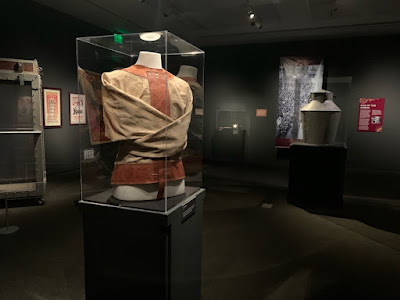 Another big ticket item--possibly the star of the show--is an original Houdini Milk Can. This is the can that reportedly came from the basement of Houdini's New York home in 1980. It's unusual in that it has only four locks and a somewhat different overall shape from other Houdini cans. But it is gaffed in the traditional manner and coming from Houdini's home is pretty good provenance. And it looks great on display! A thrill to see. 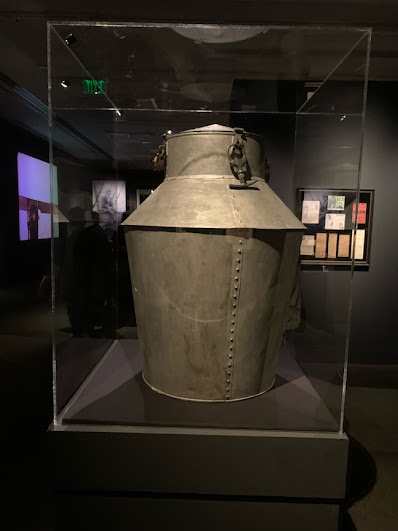 The career of the Handcuff King is well represented with original Houdini handcuffs and manacles, including a Bean Giant handcuff with a custom lock and key and an Oregon Boot to boot! There are also authentic Houdini lock picks on display. 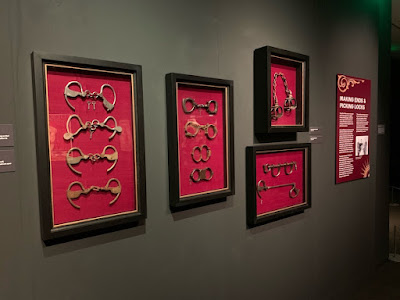 All aspects of Houdini's life and career are represented in an assortment of Houdini books, letters, programs, and other ephemera throughout the exhibit. This inscription in A Magician Among the Spirits is one of the best I've ever seen. 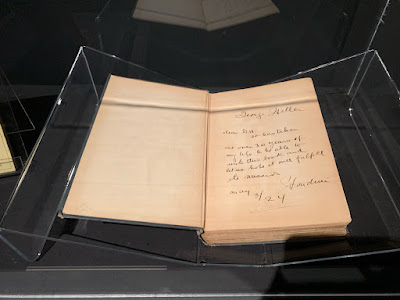 The story of Houdini's spiritualism debunking is nicely told in a seance room setting in which we hear the famous recording of Dr. Edward Saint at The Final Houdini Seance. This was popular and the room was always full, so I didn't get a good photo. But what I found most exciting here was an original Houdini prop that I'm unfamiliar with. I will let the museum's placard do the describing:

Houdini's Personal Seance Clock
This clock was used in Houdini's "debunking" seance performances of 1923 to 26 trickery in which he demonstrated how fraudulent mediums used trickery (in this case a wax hand taking the place of the medium's hand while the real hands were busy stopping in the clock!) 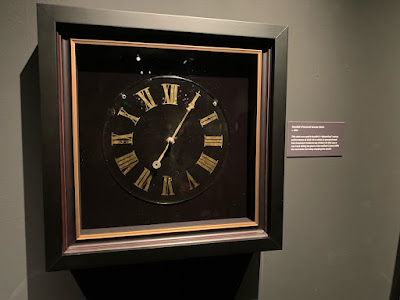 The seance room also has an incredible 2-page letter written by Bess in the final months of her life. In it she reveals a fresh new detail about Houdini's death. I will be devoting a standalone post to that treasure soon.
As you leave the main exhibit there is a personal message from Dr. Bell himself. I love that he came to Houdini via the Williams and Epstein book, The Great Houdini. The gateway biography. 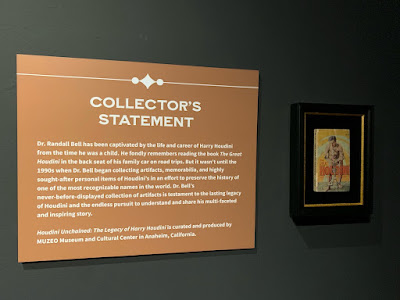 The museum has also commissioned original Houdini artwork by artists such as Melissa Chan Stone and John Coulter. The artwork is displayed outside the main exhibition and available as merchandise in the gift shop. Here's Melissa Chan Stone with her Vanishing Elephant Lenticular. 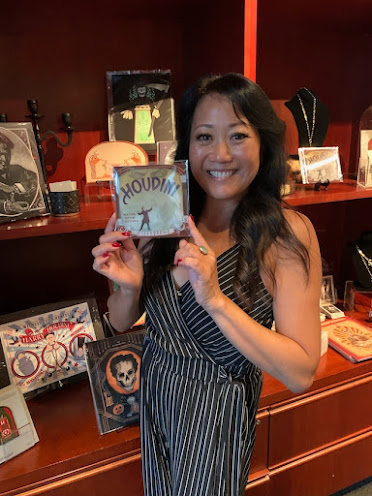 Finally, there's a special photo-booth made just for the exhibition by John Gaughan which produces a mysterious effect as you can see below. This is going to be popular! 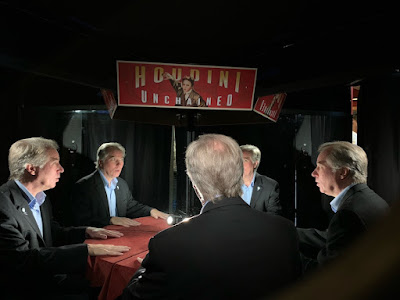 I've only just touched on the major displays here. There is much more to be discovered and enjoyed. Congratulations to Randall Bell and everyone at MUZEO for bringing Houdini to life in Anaheim!
Houdini Unchained: The Legacy of Harry Houdini will be on show until January 22, 2023. MUZEO is located at 241 S. Anaheim Blvd., Anaheim, CA 92805. Hours are Wednesday through Sunday from 11am to 5pm. Be sure and check out their parking information as that's a bit tricky.
Want more? You can view 26 high res images from the exhibition as a member of my Patreon. 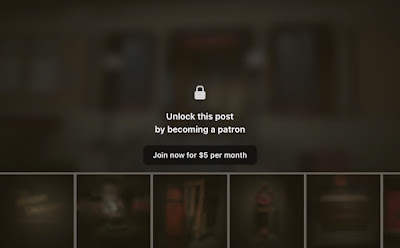